Home / Business / GVC-Amaya or 888: Which is the Better Deal for Bwin.party? 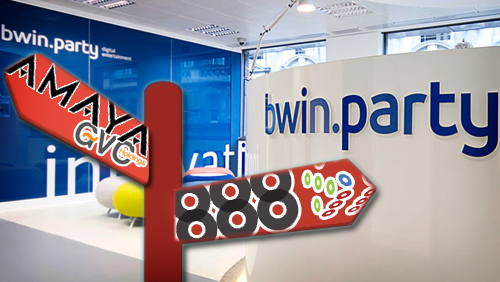 With Bwin.party now at the center of a bidding war between 888 on one side, and Amaya / GVC on the other, the answer as to what is safer for shareholders long term is easy – 888 all the way.

The Amaya/GVC route does have its advantages though and could see more success more quickly, but the way that Amaya and GVC seem to be setting up the offer puts a lot of unregulated eggs in one basket (GVC), and a lot of debt in the other (Amaya). The 888 route is the cleaner deal and has more geographical overlap and cross marketing synergies, though the question remains as to what 888 will do with Bwin.party’s unregulated grey market business.

The final price tag looks like it will be somewhere just below €2B. Some sources have €1.7B as the figure, CalvinAyre has €1.5, though in the end, since this is a bidding war after all, the final sum will probably be a bit higher if anything does go through in the end.

Let’s first take the Amaya / GVC offer. What makes sense about this route is how the two companies would divide the operations. Amaya would take the regulated, kosher markets which include Bwin.party’s regulated sportsbook. This is its best asset at €237.1m in revenues in 2014, or 38% of sales. GVC for its part would take the unregulated portion of Bwin.party’s assets, since operating in grey markets is its specialty.

GVC does not mention this outright in its public filings, but up to 92% of its business comes from unregulated markets in Brazil, Germany, and Turkey. There are hints here and there in official filings that GVC is active in these places, for example it does say that Turkey is its main B2B market, and that the World Cup was a resounding success especially for the host country Brazil, and that it enjoyed customer retention due to the World Cup “in the places that [GVC] operates”.

While there is nothing wrong with operating in unregulated markets, and it is not technically illegal, the trend towards more and more government interference in business is obvious (regulation is an Orwellian term in my opinion). GVC has been doing so well, especially since 2012 as its stock price has more than tripled, precisely because it is focusing so heavily on unregulated markets. Since risk is higher, the cost of operating there is lower, profit margins are better, and competition is low. Few other public companies will touch unregulated markets anymore with a 10 foot pole, giving GVC free reign and amazing success.

Amaya already exited grey markets in 2014 when it took over Full Tilt Poker and PokerStars, so it won’t touch the unregulated stuff from Bwin.party. The two companies, if they win the bidding war, will likely work out a deal involving something similar to the arrangement GVC had with William Hill during their joint acquisition of Sportingbet in 2013. GVC took the grey markets, putting William Hill in the position of White Knight in Lord Government’s Good Graces. GVC actually got a sweetener out of that consisting of an interest free loan of £15M, from which it is still drawing money for nothing.

And GVC is still partying hard in its grey mansion. Revenues have skyrocketed from £44M in 2011 to £225M in 2014 with earnings growing just as nicely year to year.

The biggest question though with the GVC / Amaya route is what happens when the party is over and Lord Government turns its magnificent countenance upon poor, unregulated consumers? This is the X Factor, something that cannot be predicted. Maybe it will never happen, in which case GVC / Amaya could be the better deal. But we’ve seen this before with 888, with Amaya, and with William Hill which left 55 grey markets in early 2014. If it happens in Brazil, Germany or Turkey, shareholders are in for some serious trouble. It’s a high stakes game with GVC.

As for Amaya, it has high debt of close to 80% of equity due to its humongous leveraged buyouts last year, but it also has a lot of cash, and most of its debt isn’t due until after 2019, so there is a lot of time to hedge and protect. It should make shareholders a bit uneasy to see such a levered company take on even more debt, though since we don’t know the details yet, how much cash and how many shares, how much of its existing cash it will use versus how much debt, we don’t really know how exactly it will affect Amaya’s debt pile if a deal goes through.

Financially speaking, and taking into account business synergies and cross marketing opportunities, 888 makes more sense. 888 has £193M in liquid assets, so it is hard to see how they will finance a reverse takeover without at least some debt, of which they currently have none. So this is not a question of affordability. The question is, what becomes of Bwin.party’s grey market business? Will 888 simply take it over, going back to the grey market niche it ran away from when it exited the US in response to the Unlawful Internet Gaming Enforcement Act?

Or will it spin them off into something else? Or will it simply sell them? I find it hard to believe that 888 is going to venture back into unregulated markets unshielded again after what happened to it in the US, but it’s possible. Assuming 888 has a good idea of what to do with Bwin.party’s grey markets , then 888 is the better route.

But GVC / Amaya is better equipped to absorb all of Bwin.party’s current business immediately by separating the grey and the white into different entities. If governments leave GVC alone, it will likely succeed as it has in the recent past. But you never know with politicians. And while Amaya’s debt is high, so is its cash, and most of its debt isn’t due for a long while yet.