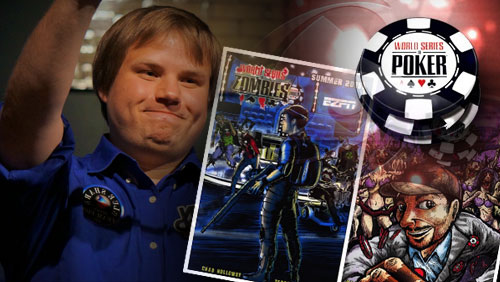 PokerNews Managing Editor, Chad Holloway, has created a one of a kind comic book combining the genre of zombies and the poker.

Not only is he the author of the successful Hold’em With Holloway series, on PokerNews, he recently appeared alongside some of the best cash game players on Poker Night in America. It was his biggest ever cash game. He walked away with close to $8,000 in profit.

He’s not done yet.

Not by a long shot.

Holloway has written a one-of-a-kind comic book that blends the genres of poker and zombies. George Romero: eat your heart out, here comes Holloway. The WSOP bracelet winner has created the World Series of Zombies (WSOZ): a comic about a zombie outbreak at the WSOP Main Event.

“Bringing WSOZ to life has been a goal of mine for a long time, and I can’t wait to debut it at the 2015 WSOP,” said Holloway, who wrote the comic. “I hope both poker players and zombies fans will enjoy what was designed to be a fun and light-hearted take on poker’s premier event.”

This was far from a solo project. Holloway penned the script and then Chicago based comic book artist Terry Huddleston brought it to life. Huddlestone produces work for Big Bang Comics and is also involved in several Marvel projects.

Holloway even managed to persuade two-time Survivor contestant, and comic book artist, Erik Reichenbach, to create a special variant cover, that will be limited to 1,000 copies.

“When I first started coming up with sketches for the cover I kept coming back to a horde of zombies behind Negreanu and what I could do to make them distinct,” said Reichenbach. “The idea of zombie showgirls made the most sense for a zombie apocalypse in Las Vegas. The juxtaposition of terrifying showgirls coming after the patrons just felt like the right way to put zombies into the world of poker.”

If you want to hold the comic in your hand, then they will be made available at the Blue Shark Optics booth at the 2015 WSOP. They will cost $5 each. Alternatively, you can download a digital copy for $1.99 at Comixology.com.

The WSOP bracelet winner has also concocted a deal with RunGoodGear.com who will print 250 limited edition shirts featuring the cover of the comic book.

But is it any good?

Phil Laak thinks so: “Holy shit balls! That is fucking pure!” Said the Unabomber after spending a few minutes on the toilet with a copy.