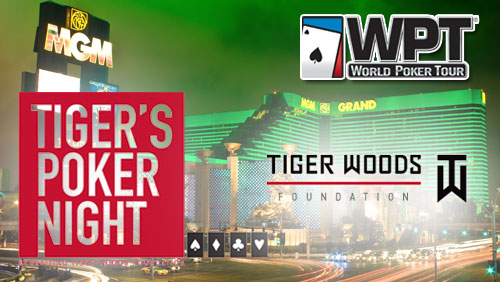 World Poker Tour and Tiger Woods will once again join forces as the annual Tiger Jam kicks off Friday, May 15 with Tiger’s Poker Night.

What are you doing this weekend?

If you are in Las Vegas, and have a few pennies to give to a good cause, you are in luck. The World Poker Tour (WPT) and the most celebrated golfer in the history of the game, Tiger Woods, will be joining forces for the annual Tiger Jam.

The festivities will begin on Friday, May 15, with the fourth-annual charity poker event known as Tiger’s Poker Night. The MGM Grand Hotel & Casino, Las Vegas, will host the event. WPT cameras will be on hand to pick up the footage. The lens will focus on the likes of Phil Hellmuth, Doyle Brunson, Daniel Negreanu, Antonio Esfandiari, and Tiger himself.

Once the poker tables have been stowed away there will be a special charity golf tournament, a rock concert, and a whole host of charity auctions. All proceeds go towards the Tiger Woods Foundation. A charity aimed at breaking the cycle of poverty, by providing college-access to low-income, under privileged students across America.

The charity has raised $16 million to date.

Packing up for #TigerJam! Are you on the list for the most exclusive event of the yr in Vegas? http://t.co/G403yQwapA pic.twitter.com/q3MWfMYwJI

The poker industry is at the cutting edge when it comes to charitable endeavors in the gaming and sporting world. Poker Hall of Famer, Mike Sexton, spoke up at the 2014 American Poker Awards (APA) about how poker donates more money than any other sport. It would be interesting to see the facts on that one.

The majority of the major online, and live poker rooms, give some of their revenue to a charitable cause. There are strong bonds between poker and charitable causes, and we are also on hand to help out in an emergency. PokerStars recently rolled out the ‘help me’ mat to raise funds for those affected by the Nepal earthquake.

Poker players are also getting involved.

Philipp Gruissem, Igor Kurganov, and Liv Boeree, are part of the team behind the formation of Raising for Effective Giving (REG). REG offer a scientific and rational approach behind the selection of their chosen charities. They work closely with the charity evaluator GiveWell, and the Effective Altruism movement.

Matt Stout is another player who spends a significant portion of his time, and money, helping others. Stout is the founder of Charity Series of Poker (CSOP). CSOP is a non-profit raising money, and awareness, for a series of worthy causes including work with Habitat for Humanity and Community Food Bank.

There are plenty of ways to get involved. There are no excuses. Dig deep and give to others today.