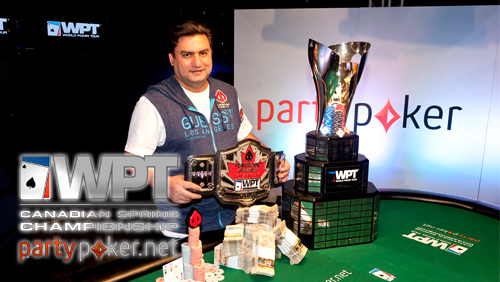 Sheraz Nasir has won the partypoker World Poker Tour Canadian Spring Championships after defeating Lu Zhang, in heads-up action, to take the first prize of $218,297 and the WPT Champions trophy.

Sheraz Nasir has won the partypoker World Poker Tour (WPT) Canadian Spring Championships. The Canadian resident defeated a field of 370 players to take the first prize of $218,297. He also wins a seat in the season-ending WPT World Championships.

“It’s awesome. It feels really good, and I feel happy to be amongst the champions.” Nasir told the WPT after his victory.

The WPT chose the Playground Poker Club, in Kahnawake, Quebec, as their Season XIV opener. The ink is still wet on the check sent to Season XIII WPT World Championships winner Asher Conniff, but the wheels on the WPT bus keep going round and round.

Nasir felt comfortable throughout, buoyed by his 10th place finish last season. He came into the final table second in chips, with 89bb, and live stream hosts Griffin Benger, and Tony Dunst, hand picked him for the win very early in that final table.

Trevor Delaney was the man with the big chip lead (106bb) at start of play. His Hendon Mob stats are fairly scant. This was a big opportunity to change that. He will be kicking himself this morning, after bowing out in fifth place, after an ill-timed bluff against Lu Zhang sent him tumbling out of the competition.

Delaney may have started with the chip lead, but he wasn’t part of the big story. That honor fell to Lu Zhang and Dylan Wilkerson. Zhang was attempting to become the first female to win a WPT Main Event title, in the show’s 14-year history, and serial WPT Main Even finalist Wilkerson was looking for title number two

Wilkerson’s tale would fade in the quickest possible manner. Levi Stevens open shoved the cutoff, for 25bb, and Wilkerson called with the slightly shorter stack in the blinds. It was AJ for Stevens, two red nines for Wilkerson, and a jack on the flop wrote a sixth place check for $40,573.

Zhang would go much deeper. If the cards would have done their job, she may have even won. But we all know that luck has a part to play. Zhang certainly had her fair share to get to the final table. It deserted her on occasions at the final. But Nasir was still sour to see her face standing in the way of his first major title.

“Out of all the final table opponents, she was the toughest,” Nasir told the WPT. “I didn’t want to go up against her heads-up. I knew I had to grind it out. I felt I had an edge.”

And grind he did – for over three hours. The chip lead was passed around like a hot potato until it finally stuck with Nasir. Zhang making a move on [Jd] [6s] [3s] [6h] – moving all-in with [As] [2c] – and Nasir called with a pair of deuces. The river card was the [7d], and Nasir held his left arm aloft in a show of celebration.

So what next for Nasir?

“I will head to the WSOP to play in the Main Event. I also look forward to playing more WPT events. Montreal is heaven. The Playground Poker Club is the best place to play poker.” Said Nasir.

The WPT now heads to Amsterdam for the second iteration of Season XIV.