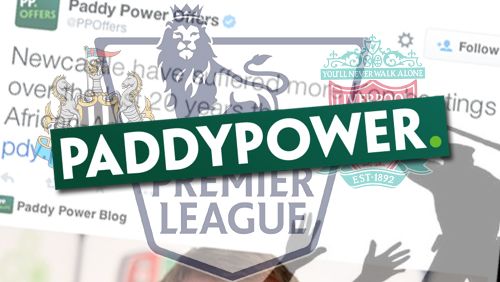 Irish bookmaker Paddy Power has found itself embroiled in another controversy after an ill-fated tweet before an English Premier League game between Liverpool and Newcastle game sparked an enormous public outcry.

Paddy Power, known for dipping its toes in controversy, tweeted before the game that “Newcastle have suffered more Kop beatings over the last 20 years than an unarmed African-American male,” alluding to the famous home end at Anfield and the rash of recent incidents in the US where unarmed African-Americans were killed by police officials. The joke was intended to generate interest in the company’s betting markets for the game itself. But as has been the case numerous times in the past, Paddy’s attempt at humour generated significant public backlash.

The tweet has since been deleted and a Paddy spokesman has officially apologized, telling CNN that the message was supposed to a joke and that “no offense was meant.” But the apology did little to appease Twitter users, who condemned the betting company for another out-of-line joke that touched on a serious issue.

This latest incident recalls the now infamous Oscar Pistorius promotion from last year that promised bettors their money back if the disgraced South African Olympian was found innocent of the murder charges slapped against him. That particular ad generated so much heat that the UK’s Advertising Standards Authority admitted that the advert attracted more complaints than any other ad in 2014.

For a company that has made its bones off of controversy, Paddy Power did its job because the company’s back in the news again.

Through the good and the bad, that’s really what Paddy Power is always looking for.