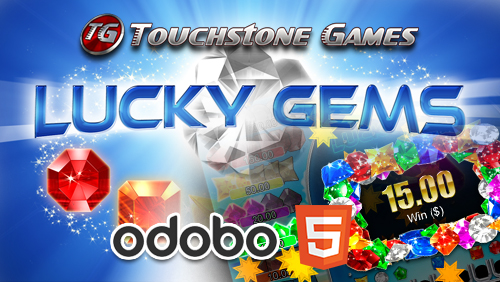 Gibraltar, 7 April 2015 – Touchstone Games has launched Lucky Gems, its first HTML5 title via Odobo. This game is already a top-performing land-based title that is now set for its online debut across mobile, tablet and desktop.

Lucky Gems is a real-money arcade game styled on pachinko. It fires 12 balls, one after another, from the right of the board. These cascade down, ricocheting on pins to land at random in pockets either at the top or along the bottom of the board. The aim is for multiple balls to land in allocated “high-value” pockets for big wins, and to accumulate additional bonus balls for more chances to win the top cash prizes.

As a precursor to pinball, with the notable omission of the paddles, pachinko originated in Japan and is still widely played today with over 12,500 pachinko halls spread throughout the country. The game grew in popularity in the 1940s and is thought to originate from the French game Bagatelle, with both arcade and gambling variants.

Touchstone’s adaptation has a gem-themed pay table with added features including the addition of up to 50 multiballs that can be triggered at random. A gamble option is available on all wins, with players able to wager all or half their winnings for the chance to win up to four times their original cash prize.

Glen Bullen, Partner Success Manager at Odobo, said, “Touchstone Games has created an inviting arcade game based on a popular title and we’re pleased to add it to the innovative games available from the Odobo Marketplace.”

Julian Mudd from Touchstone Games, commented, “We chose to bring this title to an international audience in HTML5 to cater for players across all devices. We chose Odobo because of its range of modern technologies and the added marketing capabilities via the Odobo Play app. We’re pleased at the interest shown by operators and are happy to announce that it will soon be live with Betfair and Gala Coral.”

Lucky Gems is available to try for free in the Odobo Play app or online at: http://odo.bo/p/lucky-gems

Touchstone Games was founded in 2008 and is dedicated to bringing players fresh and engaging games to play.

The team has a long history of design and development within the gaming industry and always endeavours to bring operators games of the highest quality.

Odobo is the industry’s first HTML5 Developer Program and Marketplace for the real-money gaming industry. The result is a modern, fully distributed and cloud-enabled iGaming content solution, devised by industry veterans. Operators license content from over 40 studios via the Odobo Marketplace.

Odobo Play is a consumer games discovery channel, offering games for free with the option to play for real money with regulated operators. Odobo Play is now available as an iOS App.

Odobo, based in Gibraltar, is licensed and regulated in the UK and by the Gibraltar Gambling Commission. For more information contact: [email protected]