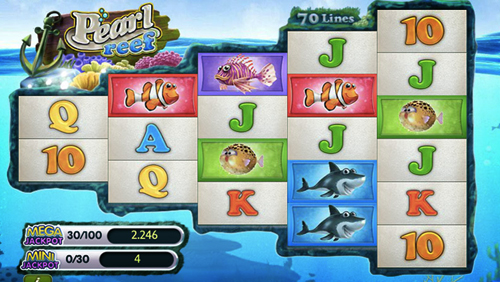 Pearl Reef Slots is the first of a new line of slots titles to appear under its Viva! Bingo & Slots suite

This 5-reel 70-line game features stacked wilds and a persistent Jackpot figure, as well as free spins where the reel grid is reversed with the stacked wilds, which increases potential for massive wins. It represents “ a jump in quality for our slots”, in words of CPO Alex Cohen, who adds that “Pearl Reef features game play mechanics, math, and graphics that would be at home and stand out on a casino floor, and is indicative of what Akamon will be doing in the future”.

The game has just been released on Akamon portals and Facebook canvas, and so far its launch has been a record in Akamon’s slots releases, which Cohen expects “will help engagement in all platforms”. It is also the first of a new line of slots titles that will appear under VIVA! Bingo & Slots suite of casino games.

The mobile version of Pearl Reef will be launched in the next weeks and will join “Hall of the Gods”, “Secrets of the Maya”, “Golden Egypt” and other titles in Akamon Slots Apps, available for Android and iOS.

Akamon Entertainment is the leading social casino & traditional games company in LatinAmerica and the south of Europe. This independent fast-growing company has 63 employees in Barcelona, Valencia and TelAviv to offer multiplatform synchronous games.