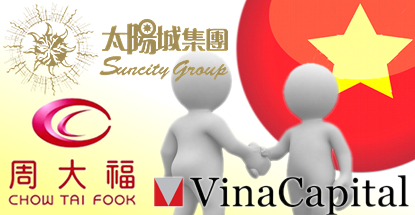 VinaCapital Group, Vietnam’s leading investment banking firm, had originally teamed with Malaysian conglomerate Genting on a proposed $4b resort casino project in Quang Nam province. Genting withdrew from the project in 2012 and it wasn’t until last October that VinaCapital began hinting that it had finally found a suitably deep-pocketed replacement in Chow Tai Fook.

This week, Vietnam Investment Review reported that VinaCapital’s new partners include not only Chow Tai Fook but also Suncity. The report claimed the Chu Lai Economic Zone Authority of Quang Nam would issue a revised investment certificate for the project reflecting the new makeup of the development team.

Earlier this month, Suncity expressed an interest in developing its own casino on Vietnam’s Phu Quoc island. It’s unclear whether this interest has waned as a result of the Quang Nam project.

In October, VinaCapital CEO Don Lam said he expected the Quang Nam project would commence construction sometime mid-2015. The project’s first phase would feature 90 gaming tables when it opens in either late 2016 or early 2017.

Chow Tai Fook and Suncity aren’t strangers, as the Cheng family that controls Chow Tai Fook also controls International Entertainment Corp, which announced one year ago that it was looking to acquire 70% of Suncity’s Macau junket operations, although that deal has yet to be finalized.

Chow Tai Fook has been on a casino tear of late, angling to obtain a South Korean casino license for a $2.6b project in the Incheon Free Economic Zone. The company also teamed up with Australian casino operator Echo Entertainment in pursuing a casino license in Brisbane.