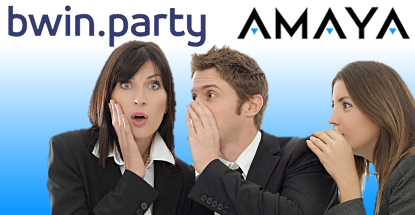 Shares in struggling UK-listed online gambling operator Bwin.party digital entertainment have recovered some of the ground they lost on Friday after rumors circulated that Canada’s Amaya Gaming may still be pursuing acquisition talks.

In November, Bwin.party confirmed it was having “preliminary discussions” with unidentified parties regarding a potential sale of the company or parts thereof. Bwin.party shares fell nearly one-fifth on Friday after rumors spread that some or all of these suitors had walked away from the negotiating table, reportedly due to the Bwin.party board’s refusal to consider proposals to sell parts of the company piecemeal.

On Tuesday, the Evening Standard claimed that Amaya was “still at the table” with Bwin.party regarding a potential acquisition. The rumors helped Bwin.party’s shares regain some of their lost ground, rising from Friday’s closing price of 83.75p to 91.15p at the end of Tuesday’s trading.

Meanwhile, Manulife Securities was at least partly the impetus behind the Quebec securities watchdog’s probe into irregular stock trading prior to Amaya’s June 2014 acquisition of PokerStars. In Decemberr, the Autorité des Marchés Financiers (AMF) paid calls on the offices of Amaya, Manulife and Canaccord Genuity looking for documents pertaining to the acquisition. Last week, The Globe And Mail reported that the Manulife investigation was focused on a “closely knit group” of a dozen brokers and their family members.

On Tuesday, the Globe reported that it was Manulife itself who alerted the AMF to the trades by the dozen brokers following an internal investigation shortly after the acquisition. The brokers in question – who account for about a quarter of the investment team at Manulife’s Dorval, Quebec branch – are said to have close family ties to Montreal’s Lebanese community.

Manulife senior executive VP Marianne Harrison told the Globe that the company’s cooperation with the AMF had begun “before the issue of the warrant and has continued throughout the investigation.” Harrison said Manulife took its regulatory obligations “very seriously” and hoped its own investigation “will assist the authorities in determining if any wrongdoing has in fact taken place.”

The AMF probe is separate from a similar investigation by the Financial Industry Regulatory Authority (FINRA), a US-based self-regulatory body. FINRA is believed to be investigating pre-acquisition trading by around 300 investors who profited handsomely when Amaya’s shares skyrocketed following the acquisition’s official announcement. The 300 names reportedly include multiple financial institutions in Montreal and Toronto, as well as fund managers, brokers and other wealthy individuals.