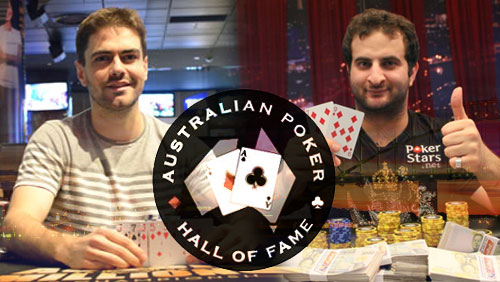 The former Asia Pacific Poker Tour Manila champion, Van Marcus, and young online hot shot, James Obst, have both been recognized for their contribution to Australian poker by the Australian Poker Hall of Fame.

With over $1.3m in live tournament earnings, and a mattress stuffed with money earned in high stakes online and live Pot-Limit Omaha (PLO) games, nobody is going to argue about Van Marcus’s inclusion into the Australian Poker Hall of Fame.

He is a former Asia Pacific Poker Tour (APPT) Main Event champion, and he has also come mighty close to bagging a World Series of Poker (WSOP) bracelet, on three occasions, after finishing third in PLO events back in 2007 & 2009, and a fifth in 2009.

Van Marcus was placed on a short list that contained luminaries such as Grant Levy, Joe Cabret, Michael Guttman, Tino Lechich and David Steicke. He was the only player inducted, and the announcement was made prior to the start of Day 2 of the Aussie Millions Main Event. Australian Poker Hall of Fame chairman, Joe Hachem, did the honors.

With the 2015 ceremony completed, that now means the Australian Poker Hall of Fame consists of 15-players. It’s the second consecutive year that a single person has been inducted after Graeme Putt became the first solitary induction back in 2013-2014.

It’s good to see the Australian Poker Hall of Fame recognizing talent of the future, alongside patting the best of the past on the back.

Known online as “Andy_McLEOD”, James Obst is a former PocketFives world number one, and one of only two players to have won SCOOP, TCOOP and WCOOP titles.

Like most talented poker players, Obst has been able to transfer his online poker knowledge onto the live circuit, and has won close to $1m in earnings that include in the APPT, ANZPT, the Aussie Millions and the WSOP.

The Australian Poker Hall of Fame have been paying attention to Obsts’s progress, and he was given a special recognition award by the panel.