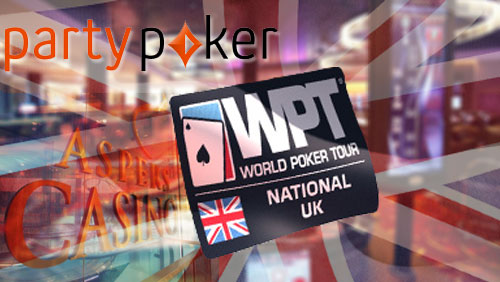 The World Poker Tour has announced plans to return to the UK with its highly successful National series heading to Stratford and Newcastle.

World Poker Tour (WPT) President Adam Pliska once told me that his brand is about you being comfortable enough to jump on the train at anytime.

It was a metaphorical expression used to define the wide variety of buy-ins the WPT offers and the National part of that train is planned to stop in the UK three times during the first half of 2015.

The WPT, partypoker and the Aspers Casino chain have partnered up to bring UK poker players, of all shapes and sizes, three lovely little treats. The first event will be held in Aspers Westfield Stratford City Feb 12-15 with the star attraction being a £600 Accumulator style Main Event carrying a £100,000 guarantee.

Last year, top UK pro Laurence Houghton broke his live tournament duck by capturing the title in this event, after beating Arvin Ravindram in heads-up action. Riverman pocketing over £20k as he cut his way through a final table that included the former WPT Dublin runner-up Chaz Chattha.

This year there will be three starting flights. Each day, you will exchange £200 for 20k in chips, with blinds increasing at 30-minute increments. Players can get involved in as many of the flights as they want (spending £200, £400 or £600), and can combine chip stacks accrued in total play to take forward to Day 2. The final table will play out on Sun, Feb 15.

“There were over 2,500 entries in last season’s partypoker WPT National UK. It proves what we set out to achieve, bringing more people into the game at various levels of buy-ins,” commented John Scanlon, Poker Manager at Aspers Casino Westfield Stratford City.

The event is sure to drag some of the UK’s finest pros into the mix, and there are even strong rumors that James Akenhead will be taking some time away from his restaurant to join  in the fun.

It’s not just British pros who are interested by the accumulator format. Team partypoker pro, WPT Raw Deal host, and WPT Champions Club member, Tony Dunst, will also be playing in the event.

“I’ve visited the U.K. before but never played any poker there; I’m looking forward to my first chance in doing so at WPT National. I’ll be there trying to win all the pounds, and hold down the Ping-Pong table. Come and attempt to beat me at the partypoker lounge,” said Dunst.

There is a live satellite qualifier operating in Aspers on Thursday, Feb 12, but if you can’t wait that long then get stuck into the online qualification program at partypoker.

The National festival will move to Aspers Newcastle April 30-May 3, before returning to Stratford for a second time July 30-Aug 2. We will bring you news of these events as we receive them closer to the time.