Jose Montes has defeated Benjamin Keeline, in heads-up action, to win the World Series of Poker Circuit Main Event at the Choctaw Casino Resort in Oklahoma. 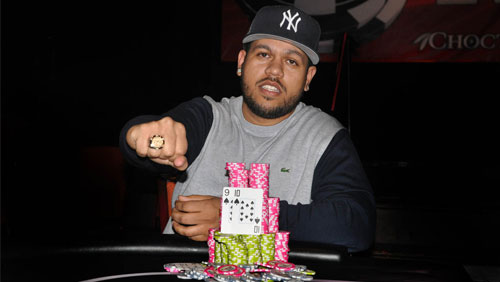 The World Series of Poker Circuit (WSOPC) continues to prosper as the event at the Choctaw Casino and Resort ends with yet another Season 11 record.

Event 11#: $1,675 No-Limit Hold’em (NLHE) Main Event attracted 1,363 entries, to create a total prize pool of $2,044,500, setting the record for the largest Main Event of the season. It’s the second record set at Choctaw after it also hosted the largest-ever WSOPC event, when Ray Henson defeated 4,053 players to take the first prize in the $365 NLH Re-Entry event.

Ray Henson didn’t get near the top of this one though. That honor is bestowed to Jose Montes who turned his fourth WSOPC cash into his most significant, winning the $352,669 first prize, and securing his seat in the season-ending WSOP National Championships.

With a field so large you could be excused for thinking the final table would resemble a school of fish, it didn’t turn out that way. Montes had to find his way through a final table containing a whole series of gold rings. Two time gold ring winner Ben Reason finishing sixth, ring winner Ryan Tepen finishing ninth, and Ben Keeline coming close to claiming his second ring with his runner-up finish.

“I can show my son one day.” Montes told the WSOP journalist when talking about his own gold ring.

Montes was referring to his 11-month old son. A son who was born on the same day as Montes. Now that’s what I call a man of fortune. There is already another bun the oven and Montes plans to use part of his six-figure sum to buy a new home.

The WSOP circuit now moves on to the Horseshoe Tunica. The action kicks off on Thursday 22nd Jan.