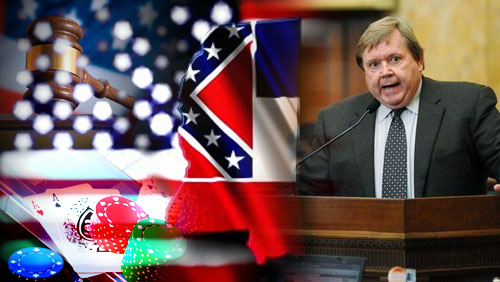 For the third time in four years, Rep. Bobby Moak has submitted an online gambling bill to the lords and masters in the Mississippi Legislature.

If online poker has any chance of emerging from the draconian deathlike grip of the Undemocratic States of America, then we have to hope that men like Democratic Representative Bobby Moak would never give up in what they believe is just and fair.

In 2012, Moak introduced The Mississippi Lawful Internet Gaming Act – it didn’t make it past the House Ways and Means Committee. In 2013, he tried again – same response. Now it’s a case of third time lucky.

House Bill No. 306: The Mississippi Lawful Internet Gaming Act is a 74-page document, not too dissimilar from the pieces of paper that were cast into the recycling tray back in 2012 & 2013. The new piece of draft legislation is being pushed through ahead of results from a comprehensive study of internet gambling governed by the Executive Director of the Mississippi Gaming Commission, Allen Godfrey.

The bill leads with the assertion that millions of people are engaged in online gambling through illegal offshore operators. It promise to bring some law and order into what it believes to be an industry that lacks oversight, regulation and enforcement.

The need to protect the young, stop sending taxes and revenue overseas, the creation of jobs, and the improvements it could make to statewide economic conditions, are cited as reasons for following the lead of Delaware, Nevada, and New Jersey.

The act is wise in the insertion that the Magnolia state could enter into agreements with other entities to share liquidity with games such as online poker. This agreement could stretch to other states, tribes and even other countries. A recent bill was also presented to the overlords in Washington State, but it was devoid of ink that would allow them to do business with other countries – New Jersey have already been in discussion with the UK for example.

The bill also includes some heavy penalties to people not willing to play ball with the state. The proposed legislation includes wording that would lead to individuals connected with the operation of illegal off shore internet gambling sites facing 10-years in prison, and fines rising to $100,000. Players caught using these sites could also face prison time (up to 90 days), cash punishments up to $10,000, and promises to confiscate any winnings like your schoolteachers used to rob your Hubba Bubba.