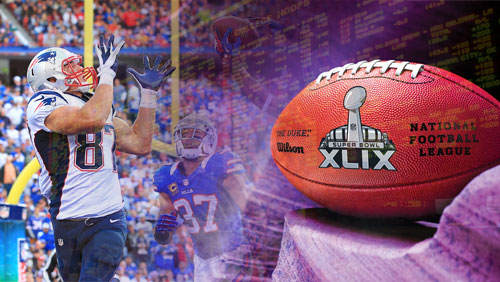 With eight teams left in the running to win the Super Bowl, oddsmakers have spent a majority of the past two days updating the Super Bowl XLIX odds. That shouldn’t come as a surprise now that the public can zero in on the remaining teams and lock in their picks before this weekend’s Divisional Round games.

Right now, the defending champion Seattle Seahawks are penciled in as the 9/5 favorites to become the first team to win back-to-back SuperBowl titles since the 2003-2004 New England Patriots. Speaking of the Pats, Tom Brady and company are the second favorites at 5/2 odds, followed by the Green Bay Packers at 5/1, and the Denver Broncos at 6/1.

See a trend here? All four of these teams received byes in the Wild Card round and are hosting the Divisional Round games from the comfortable confines of their home fields. Of the four teams that did play – and win – last weekend, the Dallas

Cowboys have the shortest odds at 9/1, followed by the Indianapolis Colts and the Baltimore Ravens, both of which have been given 18/1 odds. Making up the rear as the unlikeliest SuperBowl winner are the Carolina Panthers at 30/1.

It’s no coincidence that Carolina’s odds are this low. They’re by far one of the worst teams to make the playoffs, winning the putrid NFC South by essentially sucking the least among the four teams in that division. Add that to the fact that Cam Newton seems to come and go every game and that they’re heading to Seattle to face the Seahawks and it’s even a little surprising that they’re odds are this low. If by some miracle the Panthers beat the Seahawks this weekend, don’t expect their odds to drop that much. They’ll have to face Green Bay or Dallas on the road. Doesn’t inspire too much confidence, does it?

Naturally, bettors should key in on the four title favorites for their picks. After all, it shouldn’t be too hard to convince yourself to have Brady, Aaron Rodgers, or Peyton Manning on your side. Same with Russell Wilson and the Legion of Boom. But if you’re feeling lucky or adventurous or a combination of both, the team that should be on your radar are the Baltimore Ravens at 18/1.

They’ll have a tough test this weekend against the New England Patriots, but if there’s a team that has given the Pats fits over the past few years, the Ravens are that team. Granted, Rob Gronkowski has been next to unstoppable this season, but the Ravens have the blueprint to stop the Pats, and that should be enough to consider Baltimore as a legitimate dark horse if you’re into that kind of bets.

Whichever team you choose, be advised that this is the last week where you can odds as high as the ones being offered on the board. Once we know which teams are playing in the Conference Championship games, those odds will drop significantly.

The Jets squeak in a loss to the Patriots to remain winless
Erik Gibbs
10 November 2020
.