Home / Poker / Calling the Clock: Three Daniels and a Shark 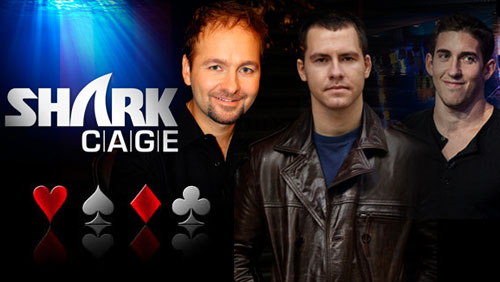 Lee Davy takes a look back at a very quiet week in poker to bring you news from three very prominent poker players called Daniel, and a Canadian shark who took a bite out of the opposition to the tune of $1m squid.

Unfortunately, I have no rabbits to pull out of my ass. It’s Christmas and even the world of poker likes to take a vacation. So the news is scant, but still succulent enough to suck a few pieces of meat off the old sacrum.

The year ends in predictable fashion: with Dan Colman starring in the role of the main headline. The marvelous, masterful, mute who won $22m in live tournament earnings, pissed off most of the world’s poker media, and called Phil Hellmuth a ‘whore,’ predictably topped everybody’s Player of the Year (POY) rankings.

The man with the Cluedoesque pseudonym topped the POY rankings of the Global Poker Index (GPI), CardPlayer and BLUFF, thanks to his world record breaking annual haul, four major titles and a kind of consistency you only see in the best northern gravy.

Another Daniel Rules the Online World

From one Daniel who doesn’t like to talk to the media, to another who will answer any question that you put to him. Daniel ‘Jungleman’ Cates has been crowned the most proficient online cash game player of the year, after taking away $3,437,039 in profit from the tables of PokerStars and Full Tilt.

Cates showed the world that intelligence coupled with hard work is the key to success. He was easiest the busiest of the Top 10 biggest online winners of the year, playing over 150k hands in the previous 12-months, and in August he surpassed the $10m mark for all-time online cash game winnings on Full Tilt. No Limit Hold’em (NLHE) remains his bread and butter, although he is still a winner in the Pot Limit Omaha (PLO) and 8-Game action.

Cates also had a fantastic year playing in dirty card rooms with over $2.5m in live tournament earnings, including a runner-up finish to Dan Colman in the €100k European Poker Tour (EPT) Grand Final Super High Roller in Monte Carlo, and victory in the World Poker Tour (WPT) Alpha8 event in Johannesburg.

The third Daniel to hit the news this week is the most famous of the three. Daniel Negreanu filled his time away from poker by writing about it. Kid Poker churned out four blog posts, over the festive period, covering topics such as multi-entry tournaments, WSOP buy-ins and guarantees, and a peek into his 2015 poker goals.

If you can’t be assed reading all four of them then let me give you the cliff notes. In his first blog post Negreanu wants you to stop blaming the WPT for hosting so many multi-entry tournaments, and instead realize that it’s a complicated combination of finding the right formula that pleases the players, the venue and the organizer.

Blog posts number two and three find the Canadian at odds with the decisions makers at the World Series of Poker (WSOP). Negreanu is not a fan of the $10m Guarantee – instead preferring a flatter pay structure – and believes the $500 buy-in event dubbed: The Colossus, is taking some of the prestige away from winning a bracelet. I guess I would feel the same way if I owned six of them and didn’t play tournament poker for the money because I had run out of places to stash the stuff.

The final blog post was his 2015 Annual Poker Goals. It’s pretty much the same as last year with the usual barrage of measures being rolled out such as winning three WSOP bracelets, cashing for $2m, and ending the year in the top 10 of the important POY rankings.

Did you watch The Shark Cage?

You know…that program that contained the hand where the good-looking bird from Finland made an ass of Ronnie Bardah.

Benger is proof positive that if you work hard enough at your game, and go out of your way to help out the media when playing at events organized by PokerStars, you will get your chance to shine – and shine he did.

Benger is now a million dollars richer, and satellites for the second series of the Shark Cage are already running on PokerStars.