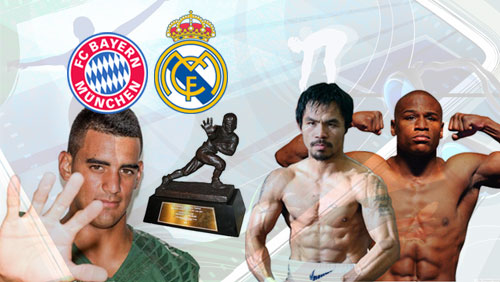 Oregon Ducks quarterback Marucs Mariota finally got his Heisman trophy after a late swoon last season doomed what would’ve been his first Heisman. But past history isn’t taken into account in a new season so Mariota did what he was supposed to last year. He won the Heisman Trophy in a landslide vote over Wisconsin running back Melvin Gordon and Alabama wide receiver Amari Cooper.

Mariota’s Heisman win isn’t just a year in the making, but it also rewarded bettors who put faith in the Oregon quarterback at 5/1 odds before the 2014 season began.

Mariota was largely seen as a favorite throughout the year and as other contenders fell out of the running – what’s up, Jameis Winston? – the award became his to lose.

To his credit, he has lived up to the billing, leading the Ducks to a 12-1 record. Now he can cement his status as one of the best college quarterbacks in recent memory if he can lead the Ducks to a national title. First up is a date against Winston and the defending champions Florida State. if the Ducks can beat the Seminoles in a game where they’re 8.5-point favorites, then it’s on the National Championship game against the Alabama Crimson Tide or the Ohio State Buckeyes.

All eyes will be on Mariota to cap off this dream season if he can lead Oregon to its first college football title in school history.

The two teams widely believed to be on a collision course to face in the Champions League Final strengthened their chances with favorable draws in the first round of the knockout stage of the tournament.

Real Madrid and Bayern Munich the co-favorites with both teams penciled in at 3/1 odds each. The Spanish giants and defending champions were given a rematch with German squad Schalke 04 a year after the Galacticos squashed their overmatched opponent, 9-2, in the same stage of the tournament. Meanwhile, the Germans drew Ukrainian champions Shakhtar Donetsk in what could very well end up being another one-sided, two-leg match this coming February.

While Real and Bayern were effectively given sacrificial lambs, the rest of the round of 16 draw resulted in a lot of appetizing games, or in some cases, revenge games from last season.

FC Barcelona (5/1) and Manchester City (15/1) were drawn together for the second-straight season, affording the English champions the opportunity to avenge last season’s exit at the hands of the Catalan giants.

The same can be said for French champions PSG (20/1), which was drawn together with English club Chelsea (7/1) in a rematch of their scintillating round of 16 draw last year that saw Chelsea advance on a last-minute goal from Demba Ba. The draw between the two sides has already prompted PSG to remind Chelsea on what it thinks about a rematch.

Hey, at least we’re getting a lot of material from these two guys. That’s more than what any of us had in the past years when discussions about a potential mega fight between Floyd Mayweather Jr. and Manny Pacquiao never amounted to anything for one reason or another.

Now, Mayweather has called out Pacquiao to face him on May 2. Great, right? Well, not really, since we’ve seen this song and dance from Mayweather before. He goads us into thinking that he’s ready to fight PacMan, only to come up with one excuse after another to scuttle the fight.

After Mayweather’s comments blew up, Pacquiao then responded by challenging Floyd to fight with all proceeds from their fight (purses, pay-per-view numbers, etc.) going to charities all over the world.

In any case, Floyd remains the 2/5 favorite ahead of their “fight” with Pacquiao being the 5/2 underdog.