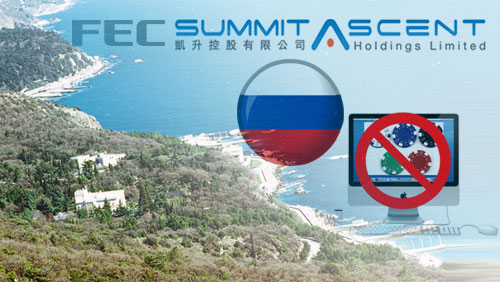 The Lawrence Ho-backed Summit Ascent Holdings Ltd and Taiwan-listed electronic gambling machine maker Firich Enterprises have confirmed previously announced plans to increase their stake in a casino project in Russia. The Summit-Firich consortium will raise its ownership stake on the project to 85 percent after coming to an agreement with local partner Oleg Drozdov for the latter to sell half of his 30-percent stake for $21.7 million.

Once the transaction is completed, Summit Ascent will see its stake in the project increase from 46 percent to 60%. Firich will add another 1% to its stake, boosting its ownership percentage to 20%. Drozdov will retain a 15% stake in the project while Melco International Development will own the remaining 5%.

Drozdov was detained by Russian authorities in November 2013 for alleged business malpractices involving the construction of a solid-waste treatment facility. Drozdov’s lawyer said that his client has yet to be charged by the judicial authorities regarding the case.

Analysts have continued to assert that Vladivostok has the potential to be a major gambling destination, drawing on its close proximity to northern China. Still, Macomber International President Dean Macomber, who has done consulting work on the Russian casino industry, told the Wall Street Journal that the industry’s success in the region places a great deal of importance on the “relationship between Russia and China, and to a much lesser extent, other Asian countries like South Korea and Japan.”

CRIMEA’S GAMING FUTURE RUBBISHED
Steve Gallaway a partner at U.S.-based Gaming Market Advisors, which prepared a casino industry report for the Primorye government in 2012, believes Russian president Vladimir Putin’s push to turn Crimea into a legal gambling zone is a waste of time, telling the WSJ that Crimea has “no value as a gambling destination.”

“It’s not where Russians go on vacation, and they don’t have the infrastructure for it.”

NEW PENALTIES FOR ILLEGAL GAMBLING
In other news, Russia’s State Duma has adopted a bill to impose criminal liability to anyone involved in organizing a gambling business in Russia without the consent of relevant authorities. The move comes as Russian officials continue to bust illegal casinos despite a nationwide ban on gambling in the country with the exception of six designated gambling zones (including the recently added Crimea and Sochi areas).

The bill would impose a fine of up to 500,000 roubles for organizing illegal casinos, betting offices or totes, including the online gambling variety. Those who are found guilty of engaging in the activity could also find themselves facing up to 240 hours of compulsory work, up to four years of confinement or up to two years in prison. The bill also stipulates administrative liability for any legal entities with fines of up to 1 million roubles and confiscation of gambling equipment.