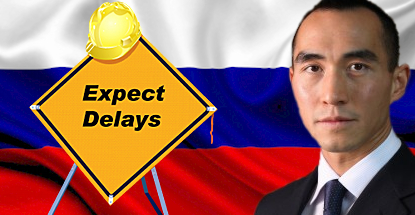 Russian officials say they will have finished mapping out a strategy for their new Crimean gambling zone by the end of the year. In July, Russian president/tsar/Bond-villain Vladimir Putin officially signed the law allowing the recently annexed Crimea territory to become Russia’s fifth designated gambling zone. On Saturday, Russian news agency ITAR-TASS quoted Crimea’s acting governor Sergei Aksenov saying his staff was busy mapping out a development strategy with “experts who at different times were involved in organization of gambling zones in various parts of the world.”

Whatever strategy these unnamed experts propose, Aksenov said he expects to begin implementation of the Crimean plan next year. As evidence of how sketchy the plans remain, Aksenov suggested the capital outlay in developing casinos in the region could range anywhere from $100m to $1b. Aksenov said the region’s casinos would “mostly” cater to foreign tourists and he was “sure we shall be able to offer conditions comfortable for them.”

LAWRENCE HO’S PRIMORYE PROJECT DELAYED, MORE INVESTOR SHUFFLING
The Primorye gambling zone near Vladivostok on Russia’s Pacific coast has so far attracted more international investment than the country’s other zones. Cambodia’s NagaCorp is developing a project set to open in 2018 while the project spearheaded by Lawrence Ho’s Summit Ascent Holdings had set a late 2014 target for the opening of phase one of its casino.

However, this week brought news that Ho’s phase one opening had been pushed back to April 2015. Summit Ascent, which holds a majority stake in the Oriental Regent joint venture with Taiwan-listed gaming device maker Firich Enterprises, released a statement this week citing “unforeseen obstacles associated with executing a project of this size.”

Specifically, the release said the project had undergone a redesign to bring things up to an “international standard,” which required approval by local authorities. Summit Ascent had also experienced delays in getting local approval on quotas for foreign workers and the importation of materials and equipment.

Meanwhile, the detention of the project’s local partner Oleg Drozdov last November has resulted in yet more investor shuffling. Drozdov’s Elegant City Group originally held a 30% stake in the joint venture, but this was reduced to 15% in April. Elegant City’s stake has now been divvied up between other investors, with 7.5% going into a discretionary trust benefiting Drozdov’s family members.

Firich will boost its stake from 20% to 25%, while the remaining 2.5% of Drozdov’s stake will go to Perfect Giant Investments Ltd., a Hong Kong firm owned by Russian businessman Petr Sindyukov, who held other gaming interests in Russia before the country put the kibosh on gambling outside the designated gaming zones in 2009. Summit Ascent continues to control 60% of the JV, with Ho’s Melco International Development holding the other 5%.