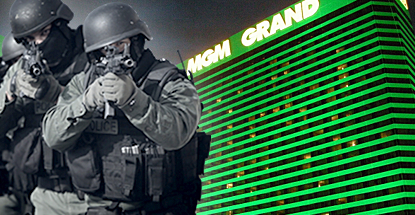 An armed standoff at the MGM Grand Hotel and Casino in Las Vegas ended Wednesday morning after the individual who sparked the commotion shot himself dead. Police officers were called to the Las Vegas Strip casino around 3am Wednesday following a phone call from a friend of the man who told police the man was armed and possibly suicidal.

The local SWAT team was deployed and several hotel rooms were evacuated as crisis negotiators attempted to contact the man. After failing to make contact, police entered the individual’s room a few hours later to find him dead from an apparent self-inflicted gunshot. No other injuries were reported. The dead man’s name has yet to be released.

This is the second gun-related fatality to occur at a Strip casino in the past few days. On the weekend, police fatally shot 31-year-old Anthony Wade Moore at Caesars Entertainment’s Rio property. Moore had a lengthy criminal history, including multiple charges of assault, domestic violence and weapons use. Authorities in Oregon released Moore on probation on Nov. 1 after charging him with multiple drug-related offenses. A warrant was issued for Moore’s arrest after he failed to show up for meetings with his probation officer.

Moore was suspected of at least two armed robberies of Vegas casinos, including a Nov. 9 heist at Palace Station and a Nov. 22 robbery of Sunset Station’s sportsbook, before police cornered him at the Rio on Sunday around 5am. Moore resisted arrest, prompting an officer to use his Taser on Moore. Moore continued to resist, and when he reached for his waist, Metro Police Officer Sean Beck shot Moore dead. Police say a gun was found on Moore’s person.