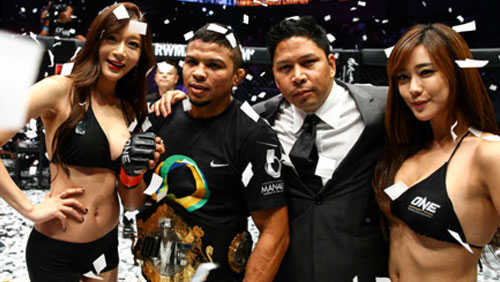 BRANDON VERA SUCCESSFUL IN ONE FC DEBUT AGAINST IGOR SUBORA

05 December 2014 – MANILA, Philippines: Asia’s largest mixed martial arts organization with a 90% market share, ONE Fighting Championship™ (ONE FC), returned to Manila in spectacular fashion, showcasing another night of world-class mixed martial arts action in front of a packed crowd at the MOA Arena. In the main event of the evening, Bibiano “The Flash” Fernandes submitted Dae Hwan Kim with a Rear Naked Choke to retain his ONE FC Bantamweight World Championship. Brandon Vera knocked out Igor Subora in a battle of heavyweights and Timofey Nastyukhin shocked the crowd with a knockout of hometown MMA hero Eduard Folayang.

ONE FC Bantamweight World Champion Bibiano “The Flash” Fernandes retained his title with a submission win over Korea’s Dae Hwan Kim. Kim proved to be a live challenger as he tested Fernandes’ championship mettle in the first round with a display of lightning quick strikes that found their mark. In the second round, Fernandes turned to grappling as he quickly worked to secure Kim’s back after the Korean missed a punch. Moments later, Fernandes locked in a Rear Naked Choke, forcing Kim to tap out.

In the co-main event of the evening, international mixed martial arts superstar Brandon “The Truth” Vera of the Philippines defeated URCC champion Igor Subora of the Ukraine via spectacular knockout, sending the MOA Arena crowd into a frenzy. The fight started off with both fighters trading heavy blows. Vera caught Subora in a Muay Thai clinch and unleashed a couple of knees to the head. Towards the end of the round, Vera slipped a punch by Subora and countered with a straight left, dropping his opponent and throwing in two more kicks for good measure. The referee stepped in to stop the fight, awarding Vera with the victory.

Timofey Nastyukhin of Russia defeated hometown hero Eduard Folayang after connecting with a combination of devastating strikes to win by knockout. After a solid exchange of power shots at the center of the cage, Nastyukhin landed a flying knee to the chin of Folayang, sending the Filipino to the canvas in the first round. Two quick kicks finished things off as the referee stepped in, awarding Nastyukhin the victory.

Roger Gracie of the renowned Gracie fighting family made a successful ONE FC debut against the hard-hitting James McSweeney. In a feeling out round, the two light heavyweights spent the majority outside of each other’s range until McSweeney connected with a roundhouse kick. In the second round, a cut opened up on McSweeney’s right eye courtesy of a Gracie left hand. Gracie went to work on the eye for the remainder of the round. In the third, things got worse for McSweeney as he hurt his foot after missing with a kick. Gracie immediately capitalized on the situation and pounced on McSweeney with downward strikes, causing the referee to call a halt to the contest.

In a bantamweight matchup, Kevin “The Silencer” Belingon impressed with a strong performance against the highly touted Koetsu Okazaki of Japan. After a slow start, it was Belingon who was able to land the damaging blows as he dropped Okazaki to the mat with a thudding right hook towards the end of the round. In round two, Belingon continued his dazzling display of elite striking with a wide array of kicks, punctuated by a flashy spinning side-kick that knocked Okazaki back. In the third, Belingon scored on a pair of kicks and finished the round with a series of sharp elbows from top position. All judges were in favor of Belingon, who won by unanimous decision.

Herbert Burns needed just a few minutes to take care of Honorio Banario, working and securing a Rear Naked Choke to end the fight in round one. As soon as the opening bell sounded, Burns took Banario’s back with lightning quick efficiency, sinking in the hooks almost immediately as both fighters hit the ground. For the rest of the round Banario tried desperately to defend from the choke but it was inevitable. Once the choke was locked in, Banario had no choice but to tap out, giving Burns the submission victory.

In a battle of light heavyweights, former NCAA Division I wrestler Jake Butler dominated Sylvain Potard in a much anticipated rematch. In round one, Butler controlled most of the action, keeping Potard ineffective against the cage. Butler used his wrestling again in round two, this time to gain mount, letting his hands go with a combination of damaging left hands. Butler continued his dominance to the end of the third and final round, winning the fight by unanimous decision.

Former Lumpinee champion Dejdamrong Sor Amnuaysirichoke of Evolve MMA showed fans just how dangerous his world-class Muay Thai can be by taking care of Rene Catalan of the Philippines in a clash of ferocious flyweights. In round one, Sor Amnuaysirichoke worked masterfully in the clinch, blasting a plethora of vicious knees to Catalan’s midsection, one of which sent the Filipino to the canvas writhing in pain. With his opponent unable to continue, Sor Amnuaysirichoke nabbed the win by knockout.

Former boxing world champion Ana Julaton showcased her newfound grappling skills against opponent Walaa Abas, winning a unanimous decision. In the first round, both fighters traded strikes in the clinch but it was Julaton who was able to score on a takedown. In the second, Julaton’s boxing shone through as she landed a series of solid blows. The third round saw much of the same action as Abas tried her best to keep the distance and avoid Julaton’s power punching.

The Philippines’ Jujeath Nagaowa and Cambodia’s Tharoth Sam kicked off the action for ONE FC: WARRIOR’S WAY in an entertaining women’s atomweight contest. The former pro-boxer Nagaowa dominated the fight with impressive boxing in the clinch and some solid ground work. In the second round, Nagaowa caught Sam out of position and swiftly worked to get full mount, unleashing ground and pound to win by referee stoppage.

Heavyweight bout: Brandon Vera defeats Igor Subora by Knockout at 3:54 minutes of round 1

Lightweight bout: Timofey Nastyukhin defeats Eduard Folayang by Knockout at 3:11 minutes of round 1