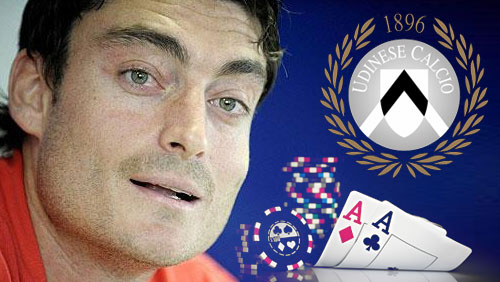 Ex Liverpool winger, Albert Riera, has been sacked by his new club Udinese after failing to turn up for a match against Chievo because he was in Slovenia playing poker.

Italian outfit Udinese have sacked their Spanish international footballer, Albert Riera, after he failed to turn up for the match against Chievo on 23 Nov 2014.

So what was so pressing?

He might have played 16 times for the former World and European Champions, and scored four goals, but that didn’t stop him choosing to play in a poker tournament instead of turning out for his new team.

Was it the European Poker Tour?

Was it the World Poker Tour?

Was it the World Series of Poker?

Albert Riera was playing in a poker tournament in Slovenia, where he finished in second place for £3,000.

Riera disagreed with the tabloid’s assertion that he was sacked. He later tweeted that both him, and the club, agreed that he would be leaving by mutual consent.

Perhaps, it also had something to do with the fact that Riera also tweeted that Udinese was ‘the worst club I’ve ever played for’ – a factually inaccurate tweet, because Riera never kicked a ball for Udinese before being fired/leaving by mutual consent (choose your own happy ending). Riera’s name hit the big time when he joined Liverpool in 2008. The Anfield outfit paid £8m when they signed him from the Spanish side Espanol. He played 40 times for Liverpool, and scored 3 goals, before they released him for publicly criticizing Rafa Benitez’s methods.

Riera isn’t the only footballer that loves a game of poker. Spanish, and Barcelona star, Gerard Pique, has participated in both the World Series of Poker (WSOP), and European Poker Tour (EPT) Barcelona, and his colleague Neymar tweeted a photo of himself playing in a hone game when recovering from his back injury during the summer.

Spanish Interest in Poker on the Rise

One of the reasons Albert Riera and Gerard Pique love their poker is the increase in interest in their home country. EPT Barcelona drew huge fields this season, and the Spanish gaming regulation: The Direccion General de Ordenacion del Juego (DGOJ), released very promising Q3 numbers for online poker.

The Spanish online poker market generated €528.43m in Q3 revenue, whereas the previous three-month period was €512.45 (an increase of 3.12%). Live tournament attendances were also on the rise with 36,000 more people sitting down to play live tournament poker, compared to the previous quarter (156k v 120k).