Life Outside of Poker: Chris Moneymaker on Fantasy Sports

This week’s guest on Life Outside of Poker is the 2003 World Series of Poker Main Event winner, Chris Moneymaker, and his subject of choice is the burgeoning business of Fantasy Sports. 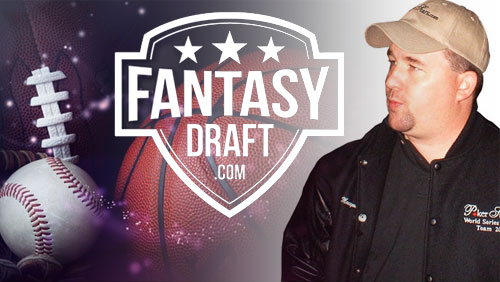 What is there to say about Chris Moneymaker that hasn’t been said before?

So let’s avoid the hard, and crusty exterior, and dig deep into the meat of the sandwich. Chris Moneymaker is one of a few professional poker players who have been signed up by FantasyDraft.com, a new Fantasy Sports outfit that is readying itself for launch in the US, and I was fortunate enough to catch up with him to talk about the concept.

What is your history with Fantasy Sports?

I am primarily a poker player, but when I am home, and can’t get on PokerStars in the US, I play Daily Fantasy Sports, and have been doing so for while. The opportunity came up to represent FantasyDraft.com so I took it.

Do you secure these types of deals because of the Moneymaker legacy, or do you have to work hard for these opportunities?

This opportunity fell into my lap if I am being honest. Matt Savage, who everyone knows is one of the most respected tournament directors out there, approached me…asked me if I played…and that’s how I got involved in the project.

They have an interesting affiliate referral scheme – tell me a little bit about that?

When the idea was pitched to me, if Matt Savage wasn’t pitching it I am not sure I would have gone with it. The tiered program approach makes you think of pyramid schemes, and a lot of negative connotations, but Matt asked me to fly to Charlotte and meet the owners and I did.

I really liked what I saw, and felt comfortable. They are segregating the player’s money so it will be separate from operational funds. It’s got great regulation, and I felt comfortable with everything that they showed me – so I signed on.

Normally in tiered schemes you have to invest money to build the network, but with Fantasy Draft you don’t have to invest a single dollar to make money. If you have a few friends who play Fantasy Sports, you can refer them to this site and you can make money.

Why do poker players love Fantasy Sports so much?

It’s similar to poker in a few ways. If you do a lot of homework, and put in the hard work, you can gain an edge. There are hundreds of thousands of people playing it in the US, and the high majority of the players are picking the hot names they see on TV, and teams based on their fandom. If you do a little bit of homework, you can find value in your line ups and have a real good shot at making a big score in one of the tournaments, or consistent money in the 50/50’s.

Different formats take different strategies and that’s what appeals to poker players. It’s like playing cash games as opposed to tournaments. With no online poker in the US it gives us something to do.

Isn’t it a little nuts that Fantasy Sports is deemed as a skill-based game, in the US, and poker is not?

It’s backwards. I don’t think they should take away online poker. If it wasn’t for casinos trying to get a piece of the online poker market we would still be playing it. I have a lot of four-letter words for it, but my opinion doesn’t matter much. I have lobbied for so many years now, and it doesn’t matter. They are going to do what they are going to do. It just sucks that the bill sneaked in at the last hour and changed so many lives.

It doesn’t make sense why something like Fantasy Sports would be legal and poker would be illegal, because in poker you are controlling more of the skill. In Daily Fantasy Sports you are using a knowledge base, but you aren’t really doing much once you have chosen your line up; but this is the hand we have been dealt and we have to play with it.

And the sporting conglomerates don’t want sports betting legalized and yet they encourage people to bet on Fantasy Sports?

I don’t get that either. You go to NFL.com and they have a huge marketing ideal surrounding Fantasy Sports. They are trying to sell the idea that it’s all about fun, but everyone in the world is gambling on this, and they no that.

Do you play Fantasy Poker, and do you think there is a market for a real money option?

I have never downloaded the game. I don’t think there is a market for real money poker. For it to take off we would need a league system, which poker needs anyway. The next big thing in poker would be for people at home to be able to watch the same people playing every week in a league. I think it would be a big boom in poker. But who is going to be paying for it and organizing it?

Alex Dreyfus, CEO, Global Poker Index has just announced plans to launch a league format in the near future.

That’s great. It’s what poker needs. Now you just need to figure out who is going to be in the league? Is it going to be the GPI300 or are people outside of that invited to play?

This is the way that poker needs to go.  Once you have a league up and running then things like Fantasy Poker has an opportunity to take off.