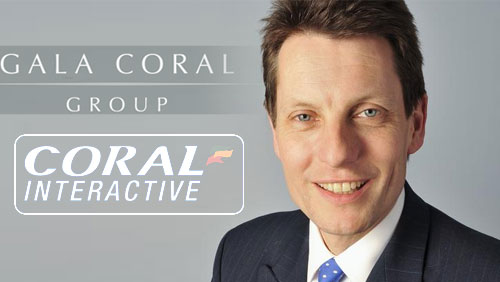 The Gala Coral Group have taken the decision to merge its Gala Interactive and Coral Interactive online gaming divisions, and hand controls to the controversial Andy Hornby.

The name of Andy Hornby has once again been thrown into the spotlight, after Chief Executive Officer (CEO) of The Gala Group, Carl Leaver, took the decision to merge Gala Interactive (GI), and Coral Interactive (CI), under a singular management team headed by the much maligned former banking boss.

In a press release issued by the group, it stated that the unified online enterprise would work more closely with Coral’s Retail Division, and Hornby would take over the reigns with John O’Reilly stepping down from his role of Managing Director (MD) for Coral Interactive.

Speaking about the merger, Carl Leaver, chief executive officer of Gala Coral, said: “We have seen huge progress in our online businesses over the last few years.

“Now is the right time to bring together our collective knowledge and experience to ensure that our brands continue to develop strongly, while at the same time putting multi-channel at the heart of what we do.

“John is an impressive leader who has been instrumental in reviving Coral’s fortunes online. He will be missed as a key member of our senior executive team, but I am delighted not to be losing him completely.

“The combination of talent in the restructured Interactive management team puts us in great shape for the next phase of our growth.”

O’Reilly will remain on the payroll for the next 12-months under the title ‘consultant.’

The announcement comes after solid Q3 Group earnings of £67.2m, a year-on-year increase of 18%, and speaking at the time, Leaver said the results were largely due to the exceptional performance of the online divisions.

The last time we were writing about The Gala Coral Group, in earnest, was back in September 2013. At that time the news on the grapevine was Gala Coral were looking to float, a rumor that sent the national media into a spin at the thought of Hornby being seated on one of the thrones of another publically traded company.

Hornby joined The Gala Coral Group, as CEO of Coral, in 2011, after allegedly walking away from the HBOS banking scandal with a $2.4m pension, at the same time 16,000 employees were being sent to the dole queue.

A Parliamentary Commission on Banking Standards would later accuse Hornby, and his colleagues of ‘catastrophic failures’ resulting in the HBOS mess, and after learning about the potential £2b flotation, Liberal Democrat, Baroness Susan Kramer, said: “After all the suffering caused by the crisis I would have hoped that Hornby and others who made so many mistakes would show a sense of honor and step down.”

He didn’t step down, the flotation rumors never became anymore than that, and it seems he has now been handed even more responsibility.

HBOS racked up close to £240bn worth of debt at the time Hornby was in charge.