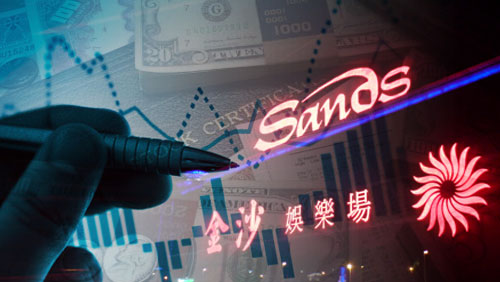 If you happened to be on the line during the last Las Vegas Sands earnings call, you may have noticed Sheldon Adelson’s heavy emphasis on stock buybacks. In fact, he used the word “repurchase” six times, noting that the casino spent $300M just this quarter returning capital to shareholders.  This completed a $2B stock buyback program authorized by the board in June 2013. That program, just completed, followed $3.1B of stock repurchases in 2012. If that isn’t enough, following this most recent stock buyback program, the board just authorized another $2B repurchase program for 2015. All in all, that totals $7.1B in 4 years.

Does that sound generous or crazy? Maybe both, but don’t let Sheldon trick you into thinking it’s anything unique or a special prize you get for being such a good shareholder. Do a little Googling and you’ll find that S&P companies all over the place are spending that exact proportion, 95% of their earnings, on buybacks according to Bloomberg, whose staff probably did the exact calculation I just did for LVS on every single company in the S&P index. Total buybacks this year for all S&P companies are teetering on $1 trillion. $914B to be exact.

Not that investors should be complaining, but it needs to be put in context. The reason that buybacks are reaching record highs is that that the global economy has never, not ever, been in such a fantastic state of loose monetary policy. Zero Interest Rate Policy (ZIRP) has given way to Negative Interest Rate Policy (NIRP) in the EU, quantitative easing continues in the US, and in order to keep currency exchange rates stable, other central banks throughout the world must competitively devalue.

If you want to know why all this printing has not resulted in major price inflation yet, these massive buybacks are one of the big reasons. With nearly $1T going into buybacks in one year, much of that liquidity is being stuck back into the pockets of investors, many of whom undoubtedly make use of dividend reinvestment programs, continually redirecting liquidity back into the capital markets and away from the consumer sector. If you want to look at it another way, this really is price inflation. It’s just price inflation in the capital sector, AKA stock markets.

At some point all that inflation is going to come pouring out into the consumer sector, and at that time, stock buybacks will have to start coming down as a proportion of earnings. You can’t keep giving away 95% of your earnings to shareholders. It’s just not sustainable. At some point you have to reinvest in your business. Since the intrinsic capital value of any given share of stock is in the value of holding it, in other words the dividends it pays, dividends will have to come down, bringing down the intrinsic value of stocks. Following that, in a best case scenario, stock prices, including that of LVS, will gently come down as capital flow is taken from shareholders and redirected to within the company, eventually to come back up again but not for a long while.

Dividends as a percentage of earnings is something like a sentiment indicator in that it’s contrarian. The more people that are bullish on a stock implicitly means that more people own it and less people have yet to buy it.  Same with dividends as a percentage of earnings. At 95%, a company simply cannot pay any more than that, and in order to grow its business to any significant extent, dividends will have to come down, along with the stock price in the same trend. That is what investors should take away from Adelson’s generosity. Just as in buy low sell high, buy when dividends are low, sell when they’re high. If you do it the other way around, you’ll lose both dividend value as well as capital value.

There can be no doubt that Sheldon Adelson is a good businessman. You’ve got to be good if you want to be the 10th richest person in the world. He is not making a mistake by donating 95% of his income to shareholders and I am not accusing him of such. If other companies are doing it, he’s got to match if he wants his stock price to compete. It’s just a reflection of current business conditions. But I continue to doubt whether even the smartest businessmen are at all aware of the nasty nature of business cycles and what causes them.

Says Adelson on his most recent earnings call:

Everyone is talking about China reducing its growth from 7.5% to 7.4%. That’s a reduction in growth of one-tenth of 1%, which continues to be a rounding error or a meaningless move. I don’t think anyone can perceive an economic slowdown by GDP changing one-tenth of 1%. I think when it turns from 7.5% to 7.6% growth, I guess it will be happy days are here again. The important point is that growth in China continues.

Also, as I have said in the past, all things in life are cyclical. We have experienced cyclicality in Macao in the past, and we believe that the current softness in the environment in Macao today is also cyclical. And that is only a matter of time before the cycle reverses itself. No one has ever suggested that the behavior of Chinese and Asian people, which has been established over a 3,000 year history, is going to change.

Of course an octogenarian like Adelson, born in the Great Depression, knows from personal experience more than most of us that all things in life are cyclical. But those cycles are exacerbated heavily by central bank money manipulation. How heavily exacerbated, not even Adelson can tell us that, because never in the history of world has there ever been so much liquidity, only one tiny symptom of which is $1T in buybacks just this year. Nobody, not even Adelson, has ever lived through the bust phase of a cycle like this one before, because it hasn’t happened yet.