Home / Business / Adelson looking out for the children and the poor 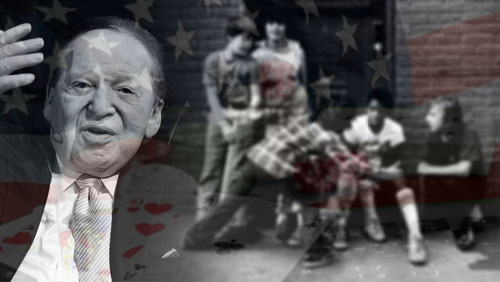 For those of you who missed Sheldon Adelson’s speech at G2E, our Rafi Farber gives us his account…at least the way he saw it.

Godfather Adelson just can’t seem to get his mind off children’s safety from gambling these days. He’s so concerned about it you’d think he actually cared. In his latest tirade against online gambling at the G2E Global Gaming Expo, he explained his position quite eloquently and succinctly, saying, “When you’re on the Internet, you cannot know your customer.” Hence, you could Heaven Forbid unintentionally deal some cards to a 17-year-old who hath commandeered his father’s credit card and knoweth not what he doeth.

Adelson then went on to advocate for harsh punitive laws against online pornography; internet-based beer, wine, and liquor sales; strict measures against over-the-counter drug sales online that could possibly be abused by minors; as well as the sale of kitchen knife sets on Amazon and other retailers that could possibly fall into the hands of a 15-year old with way too much angst and acne who may try to stab one of his teachers at school with it. He topped it off with a suggestion for a universal requirement for parental internet firewalls in every home so that kids under the age of 18 cannot fall into the hands of predators on social media or harmful sex chat sites. All this under the logic that “When you’re on the Internet, you cannot know your customer.”

In the spirit of Adelsonian morality, I will defer and say, if you are under 18 and you are reading this, please close your browser immediately. Then start lobbying Congress to protect you from yourself. Be politically active, “rock the vote” or whatever it is that they say these days.

His reasons for opposing the legalization of iGaming just got better and better as his keynote speech wore on.  Sheldon, apparently, does not want to legalize online gaming because he “doesn’t want to abuse poor people”, and thinks that internet-based gambling will make it too accessible for them with the irresistible call to hand over hard-earned money for the mere chance they’ll win more back. He topped that one off with a personal epithet. “I don’t want those people [the poor people] to get abused because when I look at people like that I see the faces of my parents [who were poor people]. I just don’t see that there is any compelling reason to put an electronic casino in 318 million hands [of poor people].”

Adelson, the saint that he is, backed up his pure motives with a new unprecedented move to bar anyone below a $40,000 annual income from entering any Las Vegas Sands casino anywhere in the world for fear that they will be abused if they enter. The poor people he insisted on protecting from himself erupted in celebration everywhere across the world, thanking Adelson for looking out for them and shedding tears of joy that the less fortunate finally have a real advocate in big business.

In this vein, Adelson continued by promising full reimbursement to any poor person who ever lost money at his casinos, upon presentation of proof of loss and proof of income below $40,000 a year. (Reimbursement will be presented in the form of gambling chips redeemable at any parlor game table.)

Responding to an insolent claim that iGaming is already happening and should therefore be legalized, Adelson said, “Then why don’t we legalize prostitution? Why don’t we legalize cocaine and heroin?” Heads of illicit prostitution rings throughout the country and several major kingpins found on the Mexican border subsequently interviewed agreed wholeheartedly, saying “Just because I do it don’t mean I gotta start worryin’ about no damn competition from some legit businessman entrepreneur piece of [expletive deleted]!”

Finally, Adelson gave his word to the crowd that in the terrible event that online gaming were to be legalized nationally, he would absolutely forbid his company or any part of it from engaging in such sadistic behavior, maintain his purity by avoiding the market entirely, and keep his hands sparkling clean from such filth, “even if avoiding those markets meant bankrupting Las Vegas Sands,” he concluded to uproarious applause.

A beam of light then shone brightly through the ceiling of the auditorium at G2E, revealing a fiery halo over Adelson’s head, after which the casino magnate then began to levitate up and away as heavenly chorus music gently washed through the halls.

The tycoon was seen the next morning at his residence writing large checks to the campaigns of various senators and congressmen on the condition that they oppose the legalization of online gambling “for the children.”

One anonymous source who saw the checks being made out who was there for some reason standing right over Adelson’s shoulder as he was writing them remarked, “I didn’t get a good look at how much the checks were for, but there were a lot of zeros.  Or maybe twos. I think.”

Steve Wynn, when questioned about Adelson’s speech, agreed with everything Adelson said especially the part about “the children and the poor people.” Those things are really important and stuff and online gambling could do really bad things to children and poor people because of the internet.