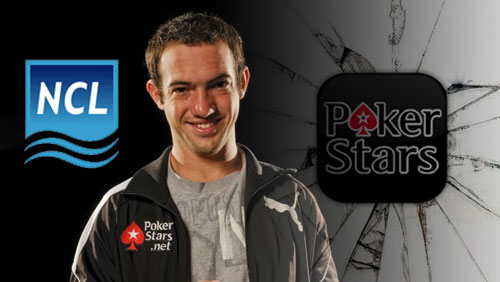 The youngest-ever World Series of Poker Main Event champion, Joe Cada, has parted ways with PokerStars and immediately walked into a deal with Norwegian Cruise Line. Alex Kravchenko and Marcel Luske have also parted ways with the recently acquired PokerStars.

When Joe Cada ended the fairy tale of Darvin Moon, by winning the 2009 World Series of Poker (WSOP) Main Event, he became the youngest-ever Main Event champion at just 21-years of age.

$8.5 million was banked, a contract with the world’s largest poker room was signed, and over the next five years Cada won another $2 million and a second WSOP bracelet. From a playing perspective one suspects Cada did everything that was asked of him.

But it wasn’t enough.

Amaya Gaming’s recent acquisition of the Rational Group has coincided with several Team PokerStars Pros being dropped after their contracts have naturally run their course. Joe Cada is the latest player to fall foul of what seems to be a new edict to reduce the sites sponsored players to a more manageable chunk.

@AFeldmanESPN Thanks! Poker Stars and I went out separate ways

Fortunately, for Cada, he has landed on his feet, after being signed as the ambassador for the Norwegian Cruise Line’s inaugural Norwegian Poker Challenge Cruise. Cada will climb on board the Norwegian Epic, 9-16 Nov, as it sets sail from Miami on its first Caribbean Cruise of the season.

The 1,081ft long, 155,873t, behemoth will visit Ochos Rios (Jamaica), George Town (Grand Cayman) and Cozumel (Mexico), whilst a four-tournament series, and cash games, will be working their way towards a $200k Guaranteed $1,100 Main Event in the ships casino.

If you are interested in joining Cada on board, the Epic, then you must register for the event prior to embarkation. Norwegian Cruise Line will be running satellites for the event on every cruise until 30 Sept.

Plans are also afoot for a second Norwegian Poker Challenge, as part of an eight-day cruise that will leave from Miami on 7 Nov 2015. This time the action will take place on the 1,068ft, 145,655t Norwegian Getaway, and satellites will once again be available on select dates and chips started Nov 1, 2014.

Alex Kravchenko and Marcel Luske Are Also Out

Joe Cada is not the only face that has been taken down from the coveted Team Pro gallery on the PokerStars website.