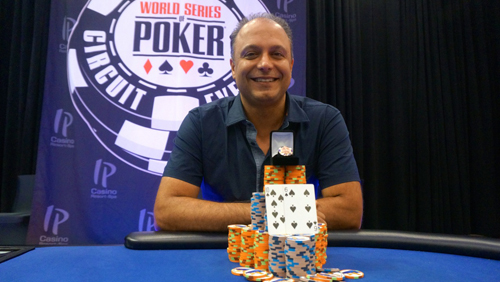 Mohammad Moeini takes his live tournament career earnings to $280,988 after defeating Brandon Newsome in a titanic heads-up battle, to capture the gold ring at the World Series of Poker Circuit (WSOPC) Main Event in Biloxi.

301 entrants paid the $1,675 to create a total prize pool of $451,500 and it was the 44-year-old Gulfport resident that came out on top. It wasn’t for the want of trying either. Moeini—who immigrated to the US from Iran over two decades ago—cashing five times in WSOPC Biloxi events (including three final tables).

When he isn’t racking up WSOPC cashes, Moeini is a hotel owner and investor, and also a husband and father of two children. He picks up a seat in the WSOP National Championships, for his victory, and will be joined by the Casino Champion Anthony Gray.

MoeiWni came to the final table as the chip leader but all eyes were on Timothy Miles. With over $1.1 million in live tournament earnings, a WSOPC gold ring, and recent victory at the $3,500 Seminole Hard Rock Poker Open in Tampa, for $295,203, he was a lot of people’s favorite for the title, until he exited at the hands of Newsome.

Biloxi, Mississippi might get a new casino
Erik Gibbs
15 November 2019