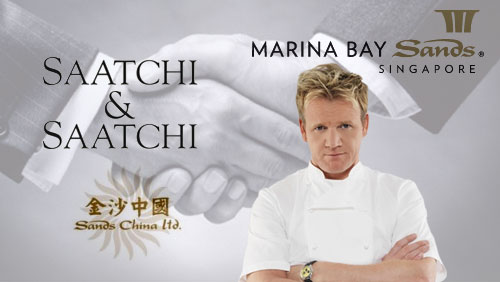 Saatchi & Saatchi beats out a competitive field made up of 10 agencies to secure the coveted account. Saatchi & Saatchi’s presentation team set a new industry record with 130 members from Shanghai, Guangzhou and Hong Kong offices. They arrived at the presentation meeting in black t-shirts with gold texts that read, “Sands Macao and Saatchi & Saatchi—One Team One Dream, Nothing is Impossible.”

“As a team Saatchi & Saatchi has exhibited great cohesiveness,” Sands China Executive Creative Director of Advertising & Brand Management Chuanda Tan said in a statement. “They have shown us deep knowledge of our target audience and out of the box creative activation for our marketing needs which are what we are looking for in our partnership… very exciting indeed.”

Saatchi & Saatchi will cover a wide range of Sands China properties, including the Venetian and Sands Macau resorts as well as hotels on the Cotai Strip that includes the Four Seasons, Conrad, Sheraton, Holiday Inn, and the 5,000-room Parisian resort.

Meanwhile, Marina Bay Sands in Singapore also made its own announcement after agreeing to a partnership with British celebrity Chef Gordon Ramsay to open a restaurant at the luxury resort and casino next year.

The restaurant is expected to be the Singapore outpost of Ramsay’s popular Bread Street Kitchen restaurant in London, using a similar “industrial warehouse” setting and serving a “British European menu.”

“I’m delighted to be opening in Singapore with a partner such as Marina Bay Sands, which is well known for providing world-class dining experiences in a market where people simply love their food,” Ramsay said in a statement.

The British chef joins an impressive list of other celebrity chefs that already have restaurants inside Marina Bay Sands, including Daniel Boulud of db bistro moderne and Wolfgang Puck Steakhouse Restaurant.

In June 2014, Ramsay announced its expansion plans in Asia, beginning with Bread Street Kitchen in central Hong Kong, which opens formally on September 18.

After Singapore, Ramsay will likely expand into Macau although no details have been released.