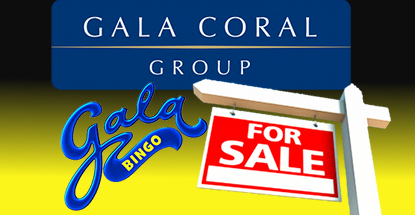 UK gambling operator Gala Coral Group reported a 18% rise in earnings in its fiscal Q3 as it ramped up its search for a way to offload its underperforming bingo business. Revenue in the three months ending July 5 rose 10% to £208.3m while earnings were up £10.3m to £67.2m.

Galabingo.com saw its active customer ranks fall 1% but spending her head rose 29% as the company put more focus on its real-money players and the site’s win was also up 29% to £4.4m. Galacasino.com was also minimizing its free-play push, resulting in a 44% decline in active customers but stakes rose 37% and gross win was up 31% to £1.2m. It Italy, Eurobet.it actives rose 42%, sports handle was up 39% and sports win rose 114% to £2.2m. Eurobet’s gaming stakes rose 11% while gaming win was up 28% to £400k. The company declined to offer specifics on its recently launched Gala.se operation in Sweden.

As has become a pattern, Gala Bingo’s retail numbers were either down or flat but cost-cutting measures helped boost earnings. Revenue fell 2% to £46.8m as admissions remained unchanged from the previous year but earnings rose 24% to £8.2m thanks to a 9% reduction in operating costs. On Friday, Gala announced it had hired bankers at Lazard to find someone to take its retail bingo operation off its hands. Analysts have speculated a sale of the 135-club bingo chain could bring in more than £250m.

Gala also announced that it would follow the lead of William Hill and Ladbrokes by closing a number of its UK betting shops this fall in preparation for the new 25% machine games duty announced in this year’s budget. Gala isn’t yet sure how many of its 1,800 shops it will close but said it was “likely to be in line” with those announced by Hills (109) and Lads (50).