Home / Business / On Caesars, Kings, and Monetary Czars, all Losing Their Power 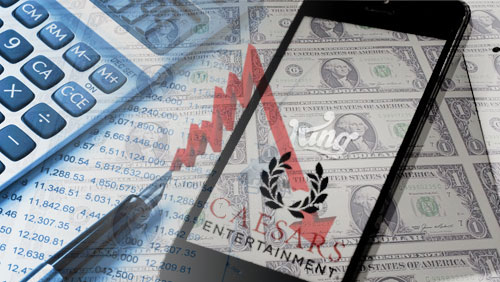 A recap on three rulers, all of whom are losing their grip in their respective subjects. Caesars (CZR) is losing its grip on debt, King Digital Entertainment (KING) is showing its cards and the picture isn’t as pretty as the market expected, and our monetary Czars at the Federal Reserve are losing their grip on the dollar supply. We start with Caesars.

Caesars bailing out the ship with shot glasses

I last covered Caesars in March. There we took a look at floating rate debt as a percentage of total debt, concluding that if Caesars can get a handle on its floating rate debt quickly, then there is still hope for the company. The conclusion from 5 months ago:

The most important thing to watch is its remaining floating rate debt. If that number starts to shrink (and it will have to do so quickly before Putin starts a snowball), then we’ll know that the CFO knows and recognizes the real challenges ahead and the company may be able to execute an underdog turnaround, especially if its healthier competitors fail to see what’s ahead. If, however, that number starts to grow, then and only then would it be time to throw in the towel.

Of our $23,847.1 million face value of debt, including capital lease obligations, at September 30, 2013, we have entered into interest rate swap agreements to fix the interest rate on $5,750.0 million of variable rate debt, and $4,424.7 million of debt remains subject to variable interest rates.

Of our $26,703.1 million face value of debt, including capital lease obligations, as of June 30, 2014, we have entered into interest rate swap agreements to fix the interest rate on $5,750.0 million of variable rate debt, and $4,539.6 million of debt remains subject to variable interest rates.

If we isolate the growth rates, we find that floating rate debt has grown by 2.6% over 3 quarters, an annual rate of about 3.5%. Its total debt has grown 12% over 3 quarters, an annual rate of 16%. The only silver lining here is that floating rate debt is growing much slower than total debt. But it is a very thin silver lining. Interest expense continues to grow and has reached nearly $600M quarterly. It will break that threshold next quarter.

I see no way out of this without a serious, near total restructuring or default. The restructuring that Caesars did undertake last July in spinning off Caesars Interactive Entertainment into Caesars Acquisition Company (CACQ) didn’t even make a dent in its debt load. One would think that the point of spinning something off, especially something profitable, is to lighten the load. One would think.

So, while Caesars’ floating debt rate is not horrible, it is not shrinking, and its total debt level is growing too quickly. Caesars is in a sinking ship bailing out furiously…with shot glasses.

The King Still has No Clothes, Except Maybe Some Underwear

My last word on King Digital Entertainment was also in March. I advised CalvinAyre.com readers to go short at $18.19. While the company did better than I expected earning $165M last quarter, it was still worse than what the rest of the market expected and KING fell 26% on the announcement down to $13.40. One can either cover the short now or wait until a month before next earnings or so for some extra downside. With expectations now lowered, P/E down below 7 and the extreme bearish sentiment wafting everywhere surrounding this monarch, KING is liable to jump on decent earnings by next quarter, so cover before then with a buffer zone to maintain profits.

The Monetary Czars are losing control of the Money Supply

The Money Stock Measures H.6 report for August 14th showed something quite interesting. The M2 supply as measured by the one week average grew by almost $100B since last week. That is a fairly large amount of money to be injected into the economy in only one week’s time. For the very first time, the amount of circulating monetary medium (bills, deposits, and money market funds) topped $11,400,000,000,000. That’s $11.4 trillion, up from $11.3 trillion last week.

More interesting still is where the money came from. If you look at table 5 on the August 14 release in the final row, you’ll see that demand deposits actually shrank by $30B from $1,216.4B to $1,176.9B. Despite this, total money supply grew by $100B. That means something else had to grow by $130B. It was savings deposits. See table 6. Declining demand deposits with growing savings deposits is a sign of capital growth. If the trend keeps going, the US market will keep heading higher.

Start with a small position, 5-10% holding companies with a strong Las Vegas presence but with limited Macau exposure. The money is starting to flow again in the US, even with the Fed’s taper almost finished. Wall Street is about to get greased up again, barring a major reversal in money growth.