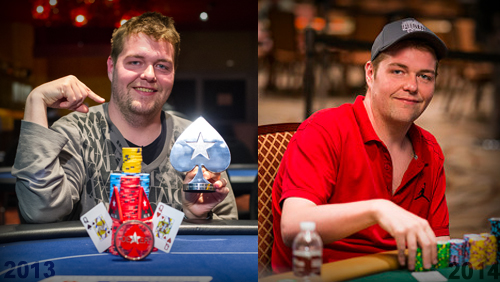 This week’s guest on Life Outside Poker is Jason Wheeler who talks about his on and off battles with weight issues and how he went into the World Series of Poker (WSOP) leaner and meaner than ever.

Jason Wheeler was forced to up sticks and move to Mexico when the dark clouds of Black Friday covered the land of stars and stripes, and he supplemented his online grind with an increased presence on the live tournament scene.

Wheeler loves the game, and can be found traveling all over the world in readiness to take his seat. I bumped into him at the World Series of Poker (WSOP) and hardly recognized him. His weight had plummeted, he looked great, and this change in physical fitness seemed to be paying dividends on the felt.

So I want to know what’s been going on in Wheeler’s life, and this is why I have asked him onto the show.

How big were you at your heaviest?

“I have been big most of my life. When I was growing up my nutrition was bad, I had bad habits and a bad metabolism. When I was approaching 20 I was the heaviest I have ever been in my life. I was pushing 270 pounds at my heaviest. Then one day I went to college and I woke up. I realized I didn’t have to be like this anymore.

“During the next year, through a combination of diet and exercise, I reached 180 pounds. Then slowly, over the years, it crept back up. Before this latest diet plan I weighed 230 pounds. I started getting scared, as it’s more difficult to lose weight, as you get older. I started to see 270 pounds flashing in front of my eyes and it bothered me.”

What have been your biggest challenges?

“You always try to trick yourself as you are gaining weight. You look in the mirror and tell yourself that you carry 210 pounds really well, but in reality I wasn’t. I was feeling sluggish and had a lot of back pain.

“I battle with this every year. Each time I go to Vegas I get into a routine and lose weight. Usually, that routine goes to shit afterwards. I gain it back over the course of the year, then I go back to Vegas and it starts all over again.

“This year I wanted to do things differently so I started way earlier to try and break the cycle. I started two months earlier and tried to make it a lifestyle choice and not just something that I do for the six weeks I am in Vegas.”

Was there a catalyst for change?

“I was walking around Vienna in March and the weather was glorious. I was exploring – something that I love to do – and I must have been walking around for about 90-minutes: stop-start as I checked things out. Suddenly, I started to get this excruciating back pain. I was enjoying the walk and didn’t want to stop, but the back pain forced me to cut my day short. This was the moment I said enough is enough.

“It’s ridiculous that I put so much effort into poker, and other areas of my life, and yet I don’t take care of myself off the felt. I re-enforced to myself that if you are going to work that hard at poker then work that hard in this area as well.

“I also had a Crohn’s Disease/IBS type problem, and when my levels of stress were high I would get severe stomach pains that would double me up. I used to use a lot of marijuana to combat the stress levels, and then I realized it was just a cop out. If I am eating a bunch of crappy food, and then putting myself under a bunch of stress, then of course I am going to have stomach pains. So this was a wake up call for me as well.”

Were you inspired by any outside influences?

“At the same time I was deciding a change was necessary, a friend of mine from back home got into a big juice kick. He lost a lot of weight and was feeling good about himself. Then Bryn Kenney went on a big weight loss thing, and other poker players were doing the same. This made me think everyone around me is getting skinny. Do I really want to be the butt of all the fat jokes? It seemed like a great time to change because I had great influencers around me trying to do the same thing.”

Did you get any particular cravings?

“It’s all routine. When I was in Vegas I was in such a routine that I wouldn’t get so many cravings. I wasn’t getting hungry and I didn’t crave late dinners with a bunch of meat for example. I had nothing like that going on. I woke up had a green juice, went to the gym; I would swim and go to the tournament awake and alert. I was consuming good food, working out and I would play the tournament in great shape. I was eating All American Dave’s food, or I would make myself a healthy dish back home and that was my day.

“The hardest time is when I am not in a routine. So when I came back home I haven’t been on it as much as I was in Vegas. Also going on the road is tough. Take EPT Barcelona for example. One of the reasons you go to such a wonderful city is to experience the culture, and food is a big part of that. It’s also our way of bonding because we all get together during dinner breaks for example. So finding a substitute for that is tough.

“I don’t have a problem saying no if I am in a routine. But when I am out of routine? I am not going to lead you in a bad direction, but I will follow if I am there.”

What are the foods that you no longer eat?

“I have always loved soda, and would drink way too many of them in a day, but I have completely cut that out of my diet. I have tried to cut out anything fried, tried to cut out pasta, potatoes, dairy and those kinds of things. I try to avoid cooking with oil and butter if I can. I have also cut out a lot of bread and meat. I try to stick to high protein-low fat products. I try to eat a lot of the things that are in my juice like apples, spinach, cucumbers, lemons, oranges and stuff like that. I also eat chicken and fish.”

I know you like to smoke a lot of weed, doesn’t this then lead to bad eating habits?

“Once again it goes back to routine. Now I am at home it’s a problem. I have been grinding online and every hour I have this 5 mins break and you either have to go to the rest room or the kitchen. You have to get away from the seat for 5 minutes. That’s been hard for me because I wasn’t playing online in Vegas so my routine was solid. When I am grinding I forget that and I allow myself snacks.

“If you are eating properly there is no such thing as a snack. I convince myself that it’s a snack and I can have it – but I don’t need it. You go to the gym and lose 400 calories, and then come back and eat something that puts 300 calories back into your body then you have just wasted your journey.

“But it is hard when you smoke so much, but it’s about discipline. I need to make sure I have healthy food prepared so I can eat it after I have smoked. If I have chips in my fridge then I might choose them. So it’s all about making different choices. Stop being a damn liar. It’s not a snack, it’s cheating, you don’t need it; it’s extra calories. We are whatever we put into our bodies.

“I had 7 cashes at the WSOP and that’s the most I have ever had. Every run was a deep run and I felt strong the entire time. A typical experience of a WSOP player is 1/2 to 3/4 of the way through people start to feel the burn. That’s why people go to EDC, and pop some pills; it’s so they can recharge the batteries. I didn’t need that this year. I was never tired and always ready to go.

“Take Bryn Kenny for example. His attitude towards poker and life was completely different this year, and it showed in the way he was playing, receiving the highest possible accolade when he won his bracelet.”