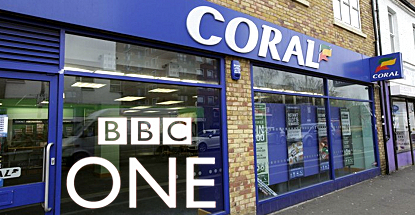 UK bookies Coral are to be the subject of a new television documentary series that aims to shine a light on the behind the scenes goings-on at a high street bookmaker. The three-part BBC One series, tentatively titled The Bookies, hasn’t yet been given an air date. The series is being produced by Boundless, the team behind such factual-based programming as World’s Toughest Jobs, The Apprentice and Great British Railway Journeys.

BBC head of documentaries Emma Willis said the point of the series was to examine “how the industry works, the everyday realities of life on the betting floor and why we’re betting more as a nation.” Willis said the series would “follow the Coral team as they open new shops and fight off competition” as well as covering how the industry is dealing with “issues of problem gambling and public opposition to new shops.”

Lord knows, the UK’s retail betting industry could use some good PR. These days, most mainstream press mentions of betting shops involve (a) robberies and/or assaults, (b) protests over new shop openings and alleged ‘clustering’ of shops on certain high streets and (c) the existential threat posed by the shops’ fixed-odds betting terminals. Small wonder that the UK recently witnessed the birth of a new retail gaming association to help defend its reputation or that James Henderson, the newly installed CEO of William Hill, told the Telegraph this week that the retail betting industry had been “unfairly demonized” over the past year.

One hopes that Coral knows what it’s getting itself in for and that the Beeb has better luck than American broadcaster CNBC had with its Money Talks series, which flamed out early after questions arose as to the bona fides of the show’s star, self-described Vegas handicapper Steve Stevens aka Darin Notaro. Money Talks failed to appeal to betting viewers due to Stevens’ previous conviction for telemarking fraud, his utter lack of profile among reputable Vegas bookies and his preposterous claim to have a 71.5% success rate at picking winners.