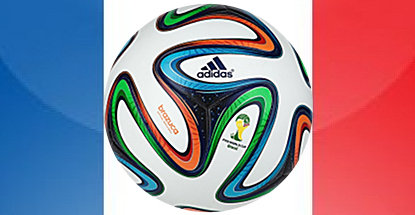 Sports betting handle grew 44% year-on-year to €286m while the return to players fell 2.6 points to 82%, all of which helped push sports bet revenue up 64% to €59m. Total football wagers over the second quarter rose 76% and the first three weeks of World Cup action in June generated €62m in wagers, nearly matching the €65.2m generated during the entire 2010 tournament and doubling the €30.8m generated during the Euro 2012 contest. Total Q2 football revenue rose 110.8% to €39m.

Total wagering on France’s World Cup squad came to €8.1m over the five games played, with €2.2m coming in the round of 16 match against Nigeria and €3.3m in the team’s quarterfinal loss to Germany. The final match between Germany and Argentina generated nearly €6m in wagers, from which French operators reaped €3.4m in revenue thanks to regular time ending in a draw.

Even discounting the World Cup, Q2 football wagering on European League matches was up 42%, Champions League up 27% and the domestic market’s League 2 up 7%. Only League 1 matches showed a decrease, dipping 12% to €12.6m, which ARJEL blamed on Paris Saint-Germain FC having distanced itself from its competitors so early in the running.

The World Cup windfall allowed total sports betting handle to eclipse horseracing wagers for the first time since the 2010 tournament. Horseracing bets fell 7% to €255m, despite a 20% increase in bonuses offered to players and a 3% increase in the number of races. Return to players fell 0.6 points to 77.7%, resulting in a 2% revenue decline to €64m.

Poker cash games continued their free-fall, with stakes diving 17% to €1.05b. ARJEL said the average weekly amount wagered was €80.6m, but one particularly dire week reported just over €71m, the lowest total recorded since the French regulated market opened. The average weekly cash game total is down 31% in two years. Tournament stakes rose 6% to €363m, but overall poker revenue fell 9% to €57.5m. For the first half of 2014, total poker revenue is down 17% to €112.5m.

The number of active online poker accounts fell 13% year-on-year to 238k, with cash game players falling 21% to 84k and tournament ranks down 13% to 214k. This marks the first such tandem decrease since the market regulated, although, as noted above, tournament stakes were still up year-on-year.