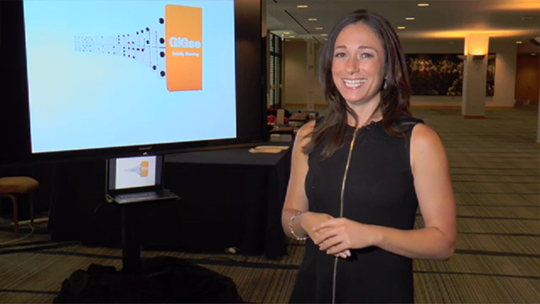 The second day of GiGse 2014 was busy and productive, with a number of simultaneous sessions running from 10am-6pm, plenty of networking in the expo area, a complimentary happy hour at Bally’s booth and two office tours at the end of the day for those who were up for it.

Foot traffic today was on par with GiGse’s day one, with a healthy crowd present from the opening of the conference until the closing and potentially beyond if the Bally’s bar went for it.

After speaking with several of GiGse’s exhibitors such as NYX, Chetu, Income Access and GambleID, it sounds as if they are pleased with their experience so far and that GiGse has delivered in its promise to provide exposure to professionals in the regulated American market. Something I rarely see at online gambling conferences are crowds gathered for demos- it was nice to see significant interest in a number of the products featured in on the GiGse expo hall.

The discussion surrounded the complications that come along with interstate compacting such as taxing issues, operators’ desire for a “level playing field” in regulated US markets and how future regulations should not soften the rules in the hopes of bringing more players into the market. What kind of message would that be sending, they said.

Plans to prosecute internationally regulated sites that are offering services to New Jersey without a New Jersey licence was also discussed, with Rover advising that such operators must take the DGE seriously because, well, they are serious. Rover confirmed that the DGE are doing a lot behind the scenes and have already written to affiliates who are promoting “unlicensed” sites within the state of New Jersey and threatened criminal sanctions.

Naturally there was time carved out during the panel for Rover to speak on the pending New Jersey license for PokerStars now that Amaya Gaming has taken over. Rover joked by saying, “What’s the best way to not answer this question” and warned the audience that he would not be providing any answers, but he can elaborate on some of the factors the DGE is considering for the investigation.

Several of these factors include the change in ownership (which changes everything, he said) and that the new owners will be subject to a rigorous review and investigation, PokerStars has not operated in the US since early 2011 and therefore New Jersey licensed operators have had time to establish their brands without PokerStars in the market and that the Stars settlement with the US did not state that Stars or Full Tilt must cease business in the US.

After lunch there were several sessions dedicated to payments and its no secret that processing payments in the regulated US market has been a challenge. Unfortunately there has been very little movement bringing the “big four” credit card companies on board with processing online gambling transactions and it sounds like it may not even be worth the fight.

Joel Leonoff, CEO of Optimal Payments, pointed out in today’s Payment Processing panel that there were four TRILLION dollars spent in 2013 on debit, credit and prepays via Visa, Mastercard, Discover and Amex- this massive number pales in comparison to the potential 100 billion in gambling spend. Omer Sattar of Sightline Payments agreed and said “the payment industry is so large in comparison to the gaming industry…we don’t even register in their minds”.

Bill Pascrell of the Princeton Public Affairs Group took a bit of a different point of view and said that “credit cards are the way people want to transact in e-commerce” and that the industry needs to step up, educate the banks and advocate what they need, even get the governors involved- “I think it will be a game changer”, he said.

In response, both Leonoff and Sattar explained that the perception the financial industry has of the gambling industry is not a good one and that these opinions of the banks are hard to change. Leonoff and Sattar said that banks have never shown an interest in gaming, even when the business was booming pre-2006, and that even if the volume is there, they won’t want to get involved.

“Maybe the banks will change their minds, I’m doubtful, but maybe”, Leonoff said.

Leonoff signed off by saying that the future for iGaming in the US is choice and its on the gaming companies to direct their customers to payment solutions that will work. Every single gaming company should have 100% acceptance and there are so many options to choose from, he said. “That buffet of opportunities and options” have worked in Europe and it can also work for America, he said.

The topic of affiliate marketing in the regulated US market was also discussed in today’s sessions, with panellists hopeful the landscape in America will eventually replicate what we have in Europe today. Nicky Senyard, CEO of Income Access, predicts that in twelve months the affiliate market in New Jersey will transform into the type of market we have been familiar with around the globe for the past ten years, a very positive outlook indeed.