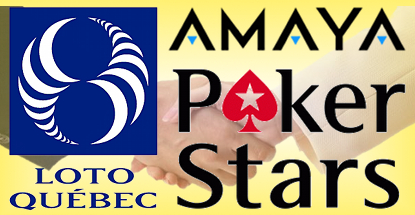 PokerStars may have found a way to remain in at least part of the Canadian market without incurring the wrath of local law enforcement. On Thursday, a spokesperson for Loto-Quebec, the provincial gambling monopoly in Canada’s second largest province, told the Huffington Post that the corporation is looking at offering paths to licensing for international online poker operators.

Loto-Quebec spokesperson Marie-Claude Rivet said Loto-Quebec is exploring the possibility of a “contractual agreement” with operators of the largest international online poker sites. The Google Translate version of Rivet’s remarks quoted her saying: “In respect of the Canadian Criminal Code, we are now looking to see if there would be no alternative for us.” The CalvinAyre.com Translate version came to “If you can’t beat them, license them.”

Rivet said Loto-Quebec was discussing the matter with PokerStars’ new owner, Amaya Gaming Group, although Rivet cautioned that these discussions were as yet “not very advanced.” In addition to being headquartered in Montreal, Amaya already has a business relationship with the lottery corporation, supplying gaming technology for Loto-Quebec’s online gambling site Espace-Jeux as well as gaming devices for Loto-Quebec’s land-based casinos.

Espace-Jeux is the only online gambling site currently licensed by the province to offer online poker and casino games, but it has struggled to rival its international competition. In the company’s most recent annual report covering the 12-month period ending March 31, the online gambling site generated just $26m in revenue. This was up nearly 11% over the previous year, but still a drop in the bucket compared to its competitors. Along with its provincial counterparts in Britich Columbia, Espace-Jeux shares poker liquidity on the fledgling Canadian Poker Network.

It’s not clear whether Quebec is contemplating allowing PokerStars to operate its own branded site within Quebec or whether Espace-jeux would simply share online poker liquidity with the vast international Stars player pool. The questions of how Quebec would tax Stars’ local operations and whether Loto-Quebec has discussed the matter with the other provincial lottery corporations are similarly opaque. CalvinAyre.com has reached out to Loto-Quebec for answers but hadn’t yet received a response by the time this was posted. Stay tuned for further updates.