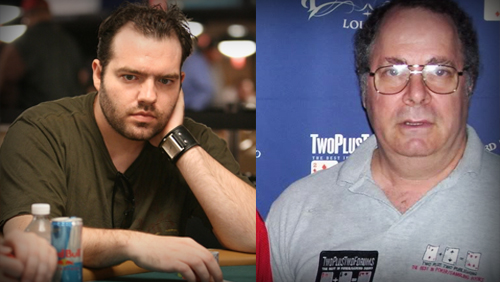 “I might have to write a whole new book.”

Those were the words of Dutch Boyd moments after winning his third World Series of Poker (WSOP) bracelet in Event #33: $1,000 No-Limit Hold’em (NLHE).

It was a huge accomplishment for a man who has now cashed four times at this series, including an 11/743 finish in the recent $1,500 H.O.R.S.E event that Tommy Hang took down.

The victory was even more impressive when you consider that Mason Malmuth’s legal team issued Boyd with a ‘Garnishment Writ’ moment before he was about to settle down and play the final table.

“Mason Malmuth had filed a garnishment writ, and served it minutes before the final table, so that was pretty frustrating, very tilting, but I hunkered down, played the best I could and here we are.” Boyd told PokerNews.

The timing of Boyd’s run of form coincides with the release of his book: Poker Tilt, and one suspects the accomplishment of finishing his first book is now making an appearance on the felt.

He picks up $288,744 for his win and told PokerNews that his third bracelet ranked, ‘slightly less exciting than the second,’ when asked how he felt about being a three-repeat champion.

During that PokerNews interview Boyd made reference to the importance that his friends had on his win, from 10 down to 1, in particular because they were able to watch the live stream, and this in turn allowed Boyd to ‘zig when everyone else was zagging.’

He picks up $288,744 for the win after defeating Steven Norden in a short and sweet heads-up encounter.

Eric Buchman has captured his second WSOP bracelet after overcoming 345 players in the game where seven cards are handed to each player and not just two.

It was a tough final table and the heads-up encounter came down between, not only two WSOP champions, but also two former WSOP Main Event final table combatants. Alexander Kravchenko taking the runner-up spot in that particular feud.

There was also another impressive performance by Bryn Kenney, who finished fifth for $25,206, his second final table of the series.

Buchman’s win sees him top the $4.2m mark, in live tournament cashes, and becomes one of a herd of a players who have used the 45th Annual WSOP to capture their second-plus bracelet.

Jeff Madsen has made his way to the top of a very impressive peak with 23-players remaining in Event #35: $5,000 Eight-Handed NLHE, at the end of the second day of action.

Madsen is in scintillating form, this year, with a series of fine performances that include a recent win on the Heartland Poker Tour (HPT) in the Commerce Casino.

Other notables to keep an eye on in that one include Sam Trickett, Josh Arieh and David Peters. Yesterday’s CalvinAyre guests, Olivier Busquet and Eric Froehlich also made it through to Day 3.

Steven Wolansky will go into the final table of Event #36: $1,500 No-Limit 2-7 Draw Lowball with the chip lead.  He finished runner-up to Michael Malm in last years 8-Game Mix, and will be hoping to increase his girth by one more place this year.

Leading the way is the relatively inexperienced Brandon Paster, who is searching for his first live cash of 2014. Fabrice Soulier and Erick Lindgren also have stacks running into six-figures in that one.

Another $10,000 Championship event has spread its wings, and George Danzer is once against flying away with it.