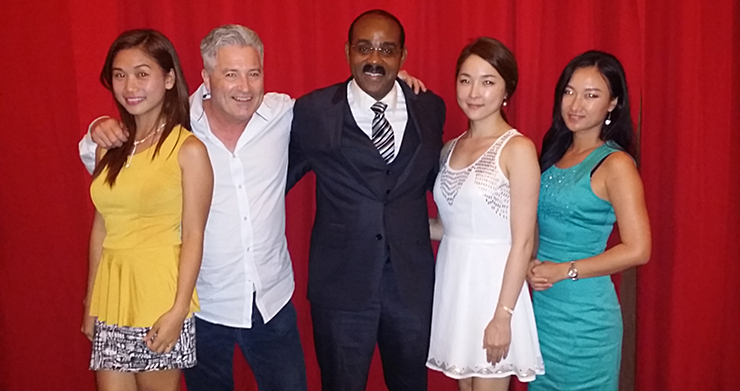 Wednesday’s ceremony, held at Government House in St. John’s, was attended by numerous dignitaries, including heads of state from Dominica, Grenada and St. Kitts. Also in attendance was the CalvinAyre.com media crew, including Calvin Ayre himself, who took time out of his busy schedule of wakeboarding and daiquiri-mixing long enough to put on proper clothes and pose for a picture (above) with Antigua’s new leader.

Browne campaigned on a pledge to jumpstart Antigua’s lagging economy, saying its people “have the capacity … to make Antigua and Barbuda the envy of the Caribbean.” Browne described his administration as “the people’s hope and aspirations” and pledged to “hit the ground running.” Those aspirations got off to a good start this week via the signing of a memorandum of understanding with a Chinese firm to build a $740m tourism project that will include a casino. ANTIGUA SAYS AMERICA’S PLAN IS “TO FRUSTRATE US”
While Browne’s inauguration was underway, an Antiguan trade representative was delivering the country’s latest protest to the World Trade Organization (WTO) in Geneva. Antigua has been locked in a decade-long David v. Goliath struggle with the United States over the US’ anti-competitive stance vis-à-vis Antigua’s online gambling industry. Despite having won repeated victories with the WTO’s Dispute Settlement Body (DSB), the US has refused to honor the rulings, essentially adopting a ‘might makes right’ stance that makes a mockery of global trade rules.

In 2007, the WTO awarded Antigua compensatory damages of $21m per year; that sum has since swelled to over $150m as the US makes Antigua offers of pennies on the dollar it knows Antigua will never accept. Antigua’s latest statement to the DSB notes that this stonewalling “is all orchestrated to frustrate us to cause us to tire and slink away into oblivion.”

WAR IS THE CONTINUATION OF POLITICS BY OTHER MEANS
Antigua has previously criticized the WTO for failing to safeguard the interests of smaller nations while letting economic powerhouses write their own rules. Wednesday’s statement insisted that the “facile excuses presented in the past [by the US Trade Representative] are completely without merit, and the United States as well as every other member of this body knows it.”

Grenada’s Ambassador Dr. Patrick Antoine delivered another statement to the WTO on Wednesday on behalf of the Organization of Eastern Caribbean States (OECS). Antoine said Antigua believed its case “presents several systemic challenges to the [WTO’s] dispute settlement mechanism” and has “the potential to undermine the credibility” of the WTO. Antigua suggested there needed to be “more flexibility in possible options for arriving at a resolution of cases such as this.”

The WTO has offered Antigua at least one other option. Over a year ago, the WTO authorized Antigua to collect its US IOU by other means, such as offering royalty-free downloads of US intellectual property. Antigua has so far refrained from exercising this nuclear option and its statement on Wednesday offered no clearer indication as to how close it might be to pulling the trigger.

Since being elected, Browne has yet to make a public statement on the WTO dispute but in January 2013 Browne criticized the Spencer government’s digital download plan. While agreeing that Antigua’s dispute with the US was “legitimate and valid,” Browne said the fight was not with IP rights holders “who have no quarrel with Antigua and Barbuda.” Browne called the idea of a royalty-free download site “a very ill-advised project that will cast our nation as a rogue state in the international community with harmful consequences for our people.”

Given that Browne made this statement nearly 18 months ago while still in opposition, his stance has to be viewed through the filter of politics. It seems far more likely that Browne’s administration will attack hard on the IP angle, because to date, it’s the only retaliatory arrow Antigua has in its quiver with which the US appears even remotely concerned. Watch this space.