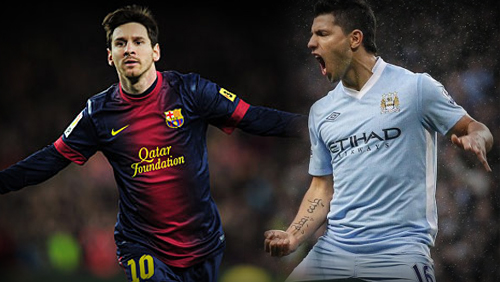 The 2014 World Cup will feature the best players who are playing for the biggest club teams in the world. It’s always nice seeing guys like Leo Messi (Barcelona) and Sergio Aguero (Manchester City) lead the same attack for Argentina. The same goes for a team like Brazil with the thunder and lightning attacking duo of Neymar (Barcelona) and Hulk (Zenit St. Petersburg).

While keeping allegiances to our club teams, this is a prop bet can give us reason to be excited. Sportsbooks are offering odds on the Top Goal Scorers based on the league they play in. We won’t cover all the professional sports leagues; instead, we’ll focus on the top five, namely the EPL, La Liga, Bundesliga, Serie A and Ligue 1.

The Premier League is well-represented in the World Cup by strikers including Liverpool’s Luis Suarez and even Chelsea’s Fernando Torres—it willbe a competitive battle to see who scores the most goals from the EPL.

Suarez, with 6/1 odds is second to Aguero’s 4/1, isn’t the favorite despite leading the EPL in goals by a wide margin. Other notables include Manchester United’s Robin Van Persie at 8/1, Everton’s RomeluLukaku at 10/1, Chelsea’s Fernando Torres at 14/1, Arsenal’s Olivier Giroud at 20/1 and United’s Wayne Rooney at 20/1.

In Spanish La Liga, there are only a handful of players to consider. The Barcelona duo of Messi and Neymar sit at the top at 2/1 and 3/1 favorites, respectively. From there, two Real Madrid players, Cristiano Ronaldo (4/1) and Karim Benzema (10/1), sandwich Atletico Madrid’s Diego Costa at (7/1). Outside of these five players, you can find odds on a pair of Barca players, Pedro and Alexis Sanches, both of whom have been penciled in at 20/1 odds.

Another competitive league with a lot of good options is the German Bundesliga. It’s interesting to see that four of the top five choices are Bayern Munich players, with only Marco Reus (5/1) being the exception as a member of Borrusia Dortmund. The Bayern contingent is led by Thomas Muller (3/1), Arjen Robben (6/1), Franck Ribery (8/1) and Mario Goetze (8/1).

In the Italian Serie A, the choices are top-heavy with only three names receiving single-digit odds. Napoli’s Gonzalo Higuainis favored at 5/2 odds, followed by AC Milan’s Mario Balotelli at 5/1 odds. Lazio’s MiroslavKlose sits third at 9/2, from there the odds drop to Juventus’ Arturo Vidal  and Torino’s Ciro Immobile, both are listed at 12/1 odds.

The French Ligue 1 is arguably the driest of the lot, thanks to the absence of PSG’s Zlatan Ibrahimovich and Monaco’s Radamel Falcao from the tournament. Without Zlatan and Falcao, the favorite status now falls on Ibra’s PSG teammate Edinson Cavani at 5/2 odds. After Cavani, another PSG player, Ezequiel Lavezzi, sits at 5/1 odds while Falcao’s Monaco and Colombia teammate, James Rodriguez, has 10/1 odds.

All these props are worth a look and a few bucks, especially the EPL and La Liga. There are plenty of good players to choose from—very enticing!Even if you’re rooting for your national colors, you can still enjoy your gambling fix through your club allegiances.

Who is the current favourite to become the 2020/21 Premier League Golden Boot winner?
Paul Seaton
10 November 2020

Could the Premier League Circus travel with a safety net?
Paul Seaton
4 May 2020