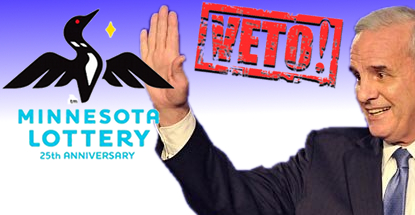 He waited until the absolute last second to do it, but Minnesota Gov. Mark Dayton (pictured) has vetoed a bill that would have banned the state lottery’s online scratch-off tickets. The Minnesota Lottery launched its first-in-the-nation online scratchers in February as both a promotional tool and a bid to lower the median age of Lottery customers. The launch immediately came under fire from state legislators, who accused the Lottery of overstepping its mandate.

Two weeks ago, legislators approved a bill that would have prevented the Lottery from selling anything online except traditional draw tickets (and would have also kiboshed the Lottery’s gas pump sales pilot program). The legislation passed by a margin of 56-5 in the Senate and 126-2 in the House, leading the somewhat smug Rep. Greg Davids to observe that, in political terms, legislators had “pinned [the Lottery’s] ears back.”

At the time, Lottery director Ed Van Petten said legislators were entitled to their opinion, even if it was “based on total misinformation.” Van Petten had also warned that the Lottery’s tech provider, Scientific Games Corp., might sue for millions of dollars to recoup the costs of bringing the product online and to compensate them for the loss of future earnings.

In announcing his veto, Dayton acknowledged the legislature’s strong sentiments but said he believed Van Petten had been “operating within the scope of his legislatively-established authority” in attempting to drag the Lottery into the 21st century. Dayton said he was also motivated by his belief that opposition to the Lottery’s plans was being encouraged by local gaming interests who feared competition from what some have equated with online slot machines.

The legislative margins of victory would have been sufficiently large to ensure an override of Gov. Dayton’s veto, but the timing of the votes came on the day the legislative session ended, leaving Dayton holding all the cards. The Minnesota Lottery restyled its logo this year, the first time since its inception 25 years ago. They may wish to do a little more tinkering, like changing that loon to a phoenix rising from the flames.