Home / Poker / WSOP Day 1 Recap: Money Falls From the Sky, Plenty Fall out of the $25k Mixed-Max, and Much More. 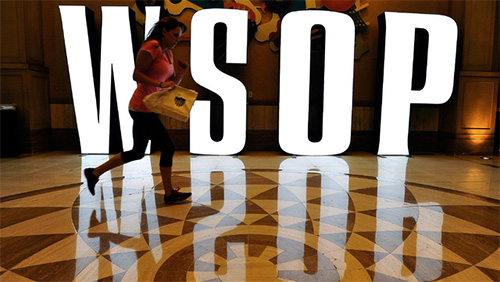 WSOP Day 1 recap sees a poker dealer from California take the chip lead at the end of the first day of the Casino Employee’s event, Vanessa Selbst and Brian Rast take control of the nine-handed action in the first day of the $25,000 Mixed-Max event, and the $25k WSOP Fantasy Poker draft is over and done with.

The 45th Annual World Series of Poker (WSOP) has kicked off and talk about chalk and cheese.

First to the paupers of the game, or as Jack Effel more eloquently put it:

“The greatest people in the industry. Without whom none of this would be able to happen.”

Event #1 got off with a bang – quite literally – as $10,000 in $1 bills rained down from the sky, preceding the shuffle up & deal, and turning the Brasilia room into a WWE Royal Rumble.

After a series of clotheslines, headlocks, and body slamming – the action got underway and boy was it fierce. 876-players (slightly down on last years haul of 898 players) was reduced to just 51 in a melting pot of action that took place over 11-levels of whizz bang, wallop action.

90 players were fortunate enough to grab a slice of the $394,200 prize money, and that included yours truly, who just eked into the money finishing in 86th place for a min-cash – not quite time to give up that day job just yet.

The reigning champion, Chad Holloway, failed to make it into the money, as did his fellow PokerNews sidekick, and 2013 12th place finisher Josh Cahlik.

The chip leader was Corey Emery, who finished the day with 164,900 chips. The poker dealer from Simi Valley California is one of the favorite’s to win the $82,835 first prize when the event draws to its conclusion at the end of Day 2.

Now to the people who do this shit for a living and it’s Vanessa Selbst who has a slight chip lead over Brian Rast in Event #2: $25,000 Mixed Max NLHE.

Rast recently told his Facebook friends that, ‘I’ve never felt more ready for success going into a WSOP before in my life. I realize that there is luck involved, but it’s going to take a lot of bad luck for me to have a bad summer this year because I’ve been playing great these last six months.”

Those not so fortunate were Marvin Rettenmaier, Chino Rheem, Dan Smith, Jennifer Tilly, and the seemingly not so broke Jean-Robert Bellande.

Day Two is the six-max leg of things, before we move onto the four-max section and finally heads-up.

12-teams are going to compete for this years $25,000 WSOP Fantasy Poker, and the draft has been completed.

The event took place at the Aria Convention Centre and the most expensive drafts were as follows:

So what can you get for a dollar these days?

If this sort of thing floats your boat, then check out the following hyperlink to get your belly full.