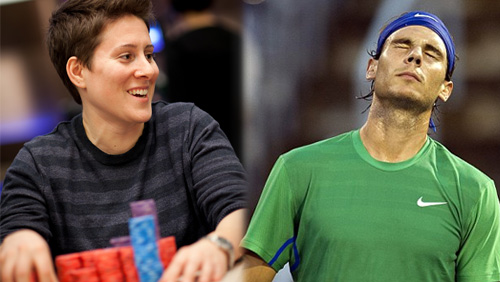 Vanessa Selbst defeats the world tennis number one, and PokerStars Ambassador, Rafael Nadal in heads-up action during a charity match in Monte Carlo.

If we call Phil Ivey the Tiger Woods of poker, then I believe it’s only fair that Vanessa Selbst is forever known as the Serena Williams of poker; a nickname that is quite apt given that Selbst has just faced off against the tennis world number one, and PokerStars Ambassador, Rafael Nadal.

There was nothing in poker that could give Selbst the jitters until she was asked to face off against one of the legends of world sport. The pair dueled across the felt at the Salon de Jeux Prive at the Casino de Monte Carlo, in front of 20+ representatives from the media.

“It’s probably the coolest experience in terms of who I have played poker against so far.” Said Selbst in an interview with PokerStars TV.

Nadal was in town preparing for the Monte Carlo Masters – an event the Spaniard won eight consecutive times before being dethroned by Novak Djokovic in 2013.

Speaking to ESPN Nadal said he would have to ‘be aggressive’ if he was to recapture his title from Djokovic, and what better way to warm up than to face off against one of the most aggressive poker players in the world.

The last time Nadal was in action on the felt was at the European Poker Tour (EPT) Prague when he won a €100,000 charity event against the likes of Brazilian footballing legend Ronaldo, the Ukrainian footballing star Andriy Shevchenko and a whole host of other sporting and poker greats.

Though Nadal may be used to one on one action on the tennis courts, he is not that experienced when it comes to the same format on the felt, with Selbst predictably taking the honors, although Nadal was gracious in defeat.

“It was a great honor to play against a strong competitor and although I lost, I had a lot of fun,” Nadal said after the match.