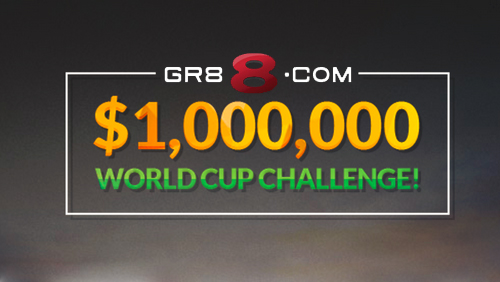 21 May 2014, London, UK (Press Release) — GR88 is pleased to announce the launch of the hottest World Cup Contest online offering their players a shot at a massive $1 Million prize.  With the World Cup just around the corner, the hype is building and all eyes will soon be on the teams, matches and rankings as things get under way.

GR88’s Million Dollar Challenge gives all qualifying players the chance to prove their football knowledge – or just get plumb lucky – by predicting the winners of each match in the Group Stage.  All they have to do is visit http://worldcup.gr88.com/picks/and make their selections before the World Cup begins. Those who miss out on the Group Stage portion are still eligible for the secondary prize of $100,000, as well as numerous GR88.com credit packs, by correctly predicting the outcomes of the Knockout Stage fixtures.

Will Spain successfully defend its title?  Will host Brazil win the World Cup on home soil?  Players can bet on each and every game at GR88 while also putting themselves in line for a cool million dollars.

GR88.com will also be offering pre-match and in-play betting on every single match in Brazil this summer, as the biggest event in world sport comes to the home of joga bonito.

About GR88.com
GR88.com (Great dot com) is a full featured online and mobile casino with more than 450 games from Microgaming and Play’n GO, including some of the world’s largest progressive jackpots. The GR88 sportsbook takes bets on over 4000 live in-game betting events every month including international football matches, tennis, rugby, National Football League, NHL and International hockey, NBA/NCAA basketball and many more. GR88 is licensed for international betting under Olympian Trading Limited BVI which supplies and operates the world’s top games from leading software providers.  GR88.com does not accept players from the USA or France.   Affiliates are managed by Mojo Affiliates