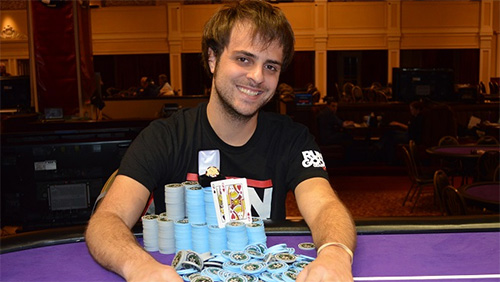 22-year old Bryan Campanello is on fire after the World Series of Poker (WSOP) bracelet holder secured his third WSOPC gold ring, and a seat in the WSOP National Championships, after securing victory in the New Orleans Main Event.

It was diversity personified as Campanello added the NLHE gold ring to the WSOP bracelet that he won playing Seven Card Razz back in 2013, and he can’t wait for the WSOP action to get underway.

“I’m playing something like 37 tournaments this summer, so the plan is
to win a bracelet. Once you get a taste of winning the WSOP bracelet — I now get why Hellmuth’s crazy. I understand it now. You get the taste and I want that again…I just want another one of those.” Campanello told the WSOP.

Standing in his way of a third WSOP gold ring was the in form Eric Blair, who had won the last two tournaments he had registered for, including a WSOPC Main Event victory at the Lodge earlier this month, putting him in line to become the first-ever back-to-back Circuit Main Event winner.

The eventual winner drowned that honor out in fifth place when his A4 flopped an ace in an all-in confrontation against the pocket tens of the blistering hot Blair.

Campanello was left to face Gary Friedlander, in heads-up action, and the pair exchanged blows – and the chip lead – for over four hours before Campanello finally ousted his opposition when his pocket queens held against the QJ of Friedlander.

“It feels good! I’m tired…we played heads-up for, like, four hours, a really long time. Winning these mains is insane. There’s so many people, 557 entrants here. I had a chance at Choctaw to do it a year and a half ago…to get the opportunity to finally close the deal and sneak my way into the National Championship as, literally, the last person in, feels pretty awesome to manage to do that. Sometimes things just fall your way and this week they happened to do that, so it’s really cool.” Campanello told WSOP officials after his win.