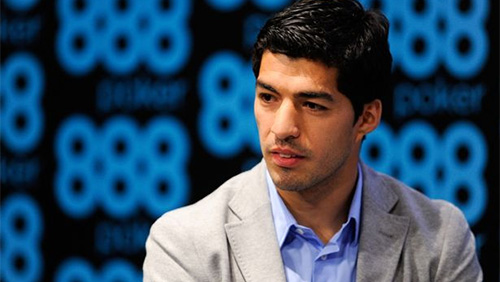 Liverpool striker, Luis Suarez, has signed a deal that will see him act in the role of ambassador for 888Poker, but is this a good thing for the site – and poker in general – or a bad thing? Lee Davy decides to have his two pennies worth.

It was a headline taken straight out of the April fools guidebook. Except we were in May.

How could this be possible?

How could one of the most sought after players in the world, the Professional Footballers Association (PFA) Player of the Year, and Premiership leading goal scorer sign up with a gambling outfit?

You may be wondering why I even question this?

Let me explain by telling you a little story.

In August of last year PartyPoker invited me to Old Trafford to play in a £250 No-Limit Hold’em tournament. As a boyhood Manchester United fan, being handed a free buy-in, free accommodation, free ticket to watch the Rio Ferdinand testimonial, and access to talk to the likes of Darren Fletcher, Norman Whiteside, Dwight Yorke and Quinton Fortune, made me a tad excitable.

Or as the taxi driver, who escorted me to the ground, said.

“You’re a jammy bastard…what are your lottery numbers please?”

It was all a great experience, and I also cashed in 19th place, but nothing prepared me for being asked to interview the former Manchester United and England legend Bryan Robson. The man is a friggin icon of mine and the last time I saw him in person was when he was signing my programme at a Charlton v Man United game when I was eight years old.

To say I was nervous was an understatement.

But it got worse.

As I sat down beside him the Man Utd press team handed me my pre-prepared set of questions and almost all of them were redlined. Talking about gambling was off the menu.

“Do you know anything about poker?” I asked.

“Right let’s get on with this.” Said the press officer.

I wonder if he’s told them?

Now that’s not that far out of a question. After all, this is a guy who has been found guilty of racially abusing another player, and has taken two (yes two) chunks out of his opponent’s bodies on two separate occasions through biting them.

A man who obviously doesn’t really give a flying fuck what anybody thinks about him.

So is that the type of ambassador we want in poker?

Man this is a tough one.

I am a big fan of the bad bastard model. I think it creates a lot more interest than your bog standard hooded and muted young men and women that grace our game today; but a racist and cannibal – now that might be taking things a tad too far.

His appointment also arrives right in the midst of one of the biggest scandals in British football history, as seemingly every week, players are being arrested for spot match fixing. The bosses of such things are even moving to ban all forms of sports betting, for all players and associations in the UK football league system.

Then on the other hand you have to say that this move by 888Poker is an inspired one. There was a 2+2 poster who made reference to the fact that PokerStars signed Rafael Nadal, and 888Poker signed Luis Suarez, as a sign of the difference in class between the two outfits.

Who cares about class?

Not this working class man I can tell you.

The role of the online poker operator is to attract more players into the game, and who are we to argue about this? It keeps me employed, and gives you something to read about whilst seated on God’s great white telephone.

A top class Premiership footballer has more pulling power than Rafael Nadal. This is why Premiership teams have been signing absolutely shite Asian footballers for the past decade. It’s the most watched sport in the world, in particularly in Asia, and the chance to triple barrel bluff Luis Suarez is not one to be sniffed at if you are a fan of Liverpool FC.

So is he a good signing or not?

I’ll let you work that one out. But before I leave you I have a question for you to ponder.

Luis Suarez is widely shunned, booed and screamed at because he is a diver. This is his edge and he takes it gleefully. Is this any different to Phil Ivey using edge sorting tactics to win gazillions at Baccarat, and why is one vilified and the other applauded?

I think Luis Suarez will feel quite at home in the world of poker.