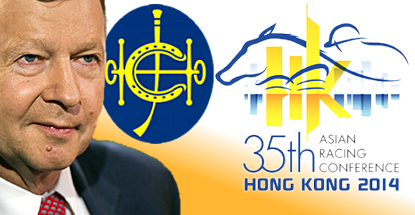 Arizona Gov. Jan Brewer dragged her state screaming and kicking into the 20th century on Monday by signing a bill authorizing bettors to place wagers on horse and dog races over the telephone. The bill originally called for such wagering to also be allowed over the internet, but that was apparently too much progress for Arizona legislators, who stripped the provision from the bill before voting. In 2007, the state banned account wagering at the request of the state’s racetracks, which were pissed that they weren’t getting a cut of the proceeds. The new bill requires account wagering operators to share their fees with the tracks.

Similar calls for embracing modernity are being voiced at the 35th Asian Racing Conference (ARC) in Hong Kong. Winfried Engelbrecht-Bresges (pictured), CEO of the Hong Kong Jockey Club (HKJC), told ARC attendees that global sports betting turnover will exceed racing turnover for the first time this year “and the gap will keep widening.” Engelbrecht-Bresges believes much of racing’s problems stems from the fact that sports derived the bulk of its revenues from broadcast rights and sponsorships, but those streams accounted for just 15% of racing’s overall revenue, with wagering accounting for a whopping 65%.

As in previous ARC speeches, Engelbrecht-Bresges warned that in addition to losing market share to sports betting, racing risked losing “relevance, not only to our customers but to independently run wagering operators.” Engelbrecht-Bresges laid out a vision of the future in which customers “will look for quality … the quality of racing, integrity, competitiveness and field size. And the top quality product will put the lower quality racing out of the market.” Mammoth operators like the HKJC will survive just fine, but Engelbrecht-Bresges warned that pari-mutuel pool betting would suffer in any market without “significant depth in pool size.”

This latter point was backed up by Richart Attenborough, CEO of Aussie betting operator Tabcorp. Attenborough noted how Tabcorp’s pool betting in Victoria and New South Wales had stagnated while fixed-odds race betting had grown from 29% of overall revenue in 2010 to 42% last year. Attenborough also claimed that racing faced a threat from online bookies licensed in Australia’s Northern Territory because they made comparatively small contributions to racing and were allowed to offer credit to punters (at least, for the moment). Attenborough said these “market distortions’ posted a threat to “racing’s proven funding model in Australia.”

Chris Downy, CEO of the Australian Wagering Council (AWC), took umbrage with Attenborough’s comments, saying Tabcorp had little to complain about given its 44% market share in Australia was achieved “largely on the back of the monopolies” it enjoyed for retail wagering in Victoria and NSW. Downy also noted that Attenborough didn’t appear to begrudge Tabcorp’s NT-licensed Luxbet site enjoying the same freedoms as the other AWC members.