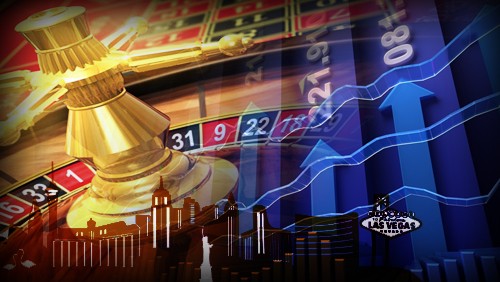 The next five years are going to be rocky. Bull markets like the one we’ve had since 2009 are not built to last. This one won’t either. Is the top in? I don’t know. But I do know that it won’t last another five years, (if even one) and that major market resets usually happen every 7 years or so. It’s been 7 years since the last one.

The trick to maintaining your capital through the next 5 years will be first, put more money in real assets. Second, hold mostly high dividend stocks while hedging against capital loss with cheap long-dated puts. Put LEAPS into 2017 will be available in November for most large cap stocks.

For the gaming sector, the two biggest issues will be debt and Macau. Debt because many of the large caps are having serious problems with interest expense even at today’s low interest rates, and Caesars isn’t the only one.Macau because the People’s Bank of China has already signaled that its quantitative easing days are behind it, at least in the mega-money-printing sense.

With this in mind, let’s take a look at the big three:

Strengths: A nice dividend that has been consistent since 2006. If you’re looking for a gaming company to hold for the next five years to protect capital (if you have a lot of it, because you’ll need it given how expensive WYNN is), hedge yourself correctly with out of the money puts and you should break even in the worst case scenario. Plus you’ll make a few bucks on the dividend. The other major plus as I’ve mentioned before is that Wynn’s debt is protected from rising interest rates with fixed debt and interest rate cap instruments, so they’ll be able to weather that storm where others won’t.

Weaknesses: It’s a really expensive stock, as it’s been parabolic since last July with a possible top to the parabola in early March. It is trading at a P/E of nearly 30.$4B (page 46) of its $5.6B 2013 revenue comes from Macau. Only $1.6B comes from Las Vegas. That’s a bit dangerous if China is going to be in serious trouble in the next 5 years. Even more top-heavy is that $3.7B of its Macau revenues come from its VIP programs, Chinese high rollers in swanky gaming rooms ferried over on junkets. That’s more than half of current revenue reliant on super rich Chinese, and who knows what happens to them as a class if the PBOC continues on course shutting down the monetary presses. This is why OTM puts are in order, dated to either 2016 or 2017. The farther out of the money you get, the more leverage you’ll have on your hedge, the less capital you’ll need to hedge with.

Strengths: Dividends also make it an OK income stock, but they have only been forthcoming since 2012. If interest rates and China both stay stable, LVS could be the best capital growth pick as it has a strong presence in Singapore with $2.3B (page 48) in revenue coming from there. Singapore should be a relative island of stability over the next five years in any case. Other than that, through the eyeglass of my debt and China outlook, LVS is in a very dangerous situation.

Weaknesses: LVS is almost as expensive as WYNN, with a P/E ratio of 27. It has even more of a top-heavy revenue structure with Macau clocking in at $8Band Las Vegas only at $1B. Any serious hit to Macau and Las Vegas Sands will be in big trouble. That, and though its debt is small, it is entirely unprotected, exposed to rising rates. If you are a believer in LVS based on growth prospects in Singapore, I suggestion going a bit heavier on your hedge here.

Strengths: Unlike Wynn and LVS, MGM has less of a stake in Macau than the other two, and is much more heavily invested domestically. $6B of its revenue comes from US operations, and only $3.3B from Macau. If China takes a big hit, MGM will be in a better situation going forward than the other two. (I can’t say the same about interest rates though, see below.)

Weaknesses: MGM is bleeding cash now because of its large debt $13.5B debt load. Interest expense on that debt was $857M in 2013, accounting for its 2013 loss of $157M despite nearly $10B in revenue. This company can’t even handle low interest rates, let alone high ones. Though some of its debt is fixed rate, not nearly enough of it is, and high interest rates will fleece MGM, as admitted in its 10-K (page 14). I see rising interest rates as a much higher probability than a Chinese crash, though in my opinion both are likely. In that sense, MGM is a much better straight-up short. And it has no dividend either.