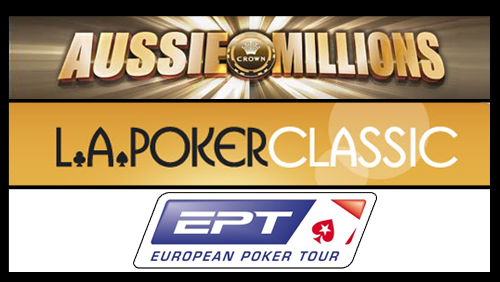 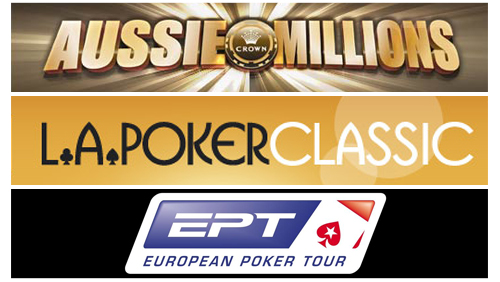 The Grand Slam is an unofficial concept in both golf and tennis, designating the winner in a single calendar year of all four of the game’s major tournaments. In tennis, the four majors are the Australian Open, the French Open, Wimbledon, and the U.S. Open. Both sports’ grand slams are exceedingly difficult to pull off. In golf, they are the U.S. Open, the British Open, the PGA Championship, and leading them all off, The Masters, the 2014 installment of which started yesterday. Nobody has ever done it in golf’s modern era, and only Bobby Jones was able to win it prior to the establishment of the Masters. Including doubles, just 17 players have done it across men’s, women’s, and junior tennis since 1930.

We don’t have a grand slam in poker (even though we have a Grand Slam of Poker thanks to Larry Flynt), but the concept translates well from these individual sports to the felt. We’ve borrowed such concepts from other sports before, like the Triple Crown for winning an EPT event, a WPT event, and a WSOP event during one’s career. So why not a grand slam, too? Winning a grand slam in poker would be far more difficult than in tennis, or even golf, because there are no river cards in either of those games, so poker’s grand slam would have to be a lifetime achievement, more akin to what’s called a Career Grand Slam in tennis. It’s the kind of accomplishment that, if anybody were ever to win it, should grant immediate entry to the Poker Hall of Fame.

So which tournaments would make the cut? After taking into account the tournament’s history, field size, and prize pools, and excluding high-roller events and tournaments played in game other than no-limit hold’em for ease of comparison, here’s my proposal.

While the top half of the globe is mired in winter, Australia is living it up in the summertime – so the Australian Open is the first major tennis tournament of every calendar year. The Aussie Millions fills the same niche in poker, offering a sunny getaway with some of the world’s richest poker tournaments from late January to early February. It’s been running since 1998 and the $10,000 Main Event first awarded a $1,000,000 top prize in 2005, but the Aussie Millions really hit the poker world’s radar when Gus Hansen won the tournament back in 2007. (He later wrote a must-read tournament strategy book, Every Hand Revealed, detailing how he won the tournament.) The Aussie Millions routinely draws a large field and the prize pools reflect this: at least 629 players have shown up every year since 2007, giving every champion a prize of at least $1.5 million.

Los Angeles is the undisputed poker capital of the world, with more table of more different games running 24/7 than any other city in the world. The heavyweight champion of LA poker is the Commerce Casino, and its LA Poker Classic is one of poker’s greatest tournaments. Long before the poker boom, the LAPC kicked off in 1992 with 31 preliminary events and a $5,000 Championship Event that drew 57 players. The Main Event had its first $1,000,000 guarantee in 2002 and the buy-in went up to $10,000 in 2003, the tourney’s first year on the WPT. Since 2005 it has drawn at least 500 players and awarded a top prize of no less than $1,000,000.

The European Poker Tour’s tenth season will wrap up early next month at the EPT Grand Final in Monte Carlo, the crown jewel of poker tournaments in the world’s second-largest market. The high roller events will get plenty of attention but the €10,000 Main Event is still the biggest tournament on the schedule. Since its third year it has drawn at least 500 players every year, and since its second year the tournament’s top prize has always been worth at least $1,000,000 U.S. (Even Rob Hollink’s prize in Season 1 was worth $845,000.) The early years were friendly to American players, but as time has gone on the European contingent has dominated.

The one true no-brainer on this list, the WSOP Main Event is the entire reason that tournament poker exists. Brad Daugherty won $1,000,000 for his 1991 championship, the first million-dollar prize in all of poker. Since Chris Moneymaker’s win in 2003, the tournament has drawn no less than 839 players, and since 2004 its average field has been 6,380. Winning this tournament means instant entry into the annals of poker, and it’s the cornerstone of our grand slam.

Notable past champions: All of them, really. This is poker’s world championship for a reason.

Only two players in poker history have ever won two of the tournaments on this list: Johnny Chan and Gus Hansen. Johnny Chan’s two WSOP Main Event titles in 1988-89 made him a lock for the Poker Hall of Fame before he was ever eligible, and his LAPC win back in 2000 gave him two of the four titles for our grand slam. Gus Hansen also won the LAPC, famously taking down the first one ever to be broadcast as part of the World Poker Tour (the second of three career WPT wins). His Aussie Millions victory makes him the only player besides Chan to achieve half of our grand slam.

The concept of the grand slam in both tennis and golf came about when both of those sports were in relative infancy, so picking out the big tournaments was an easy task. Poker, however, has already exploded onto the scene, so the task of picking out the big ones is tougher.

The PokerStars Caribbean Adventure is one of the game’s premier tournaments, but it’s squished right between the Aussie Millions and LAPC- and with the EPT Grand Final, another PokerStars-sponsored tournament, on the list to spread the grand slam out geographically, it didn’t make the cut. The WSOP Europe Main Event has become quite prestigious in its own right, but it’s only being run once every two years now since the WSOP expanded into the Asia-Pacific market and became afraid of oversaturation. Once upon a time the WPT Championship, with its $25,000 buy-in and huge fields, would have made this list, but it’s fallen on hard times in recent years, struggling to award a $1 million prize in some years despite the high price tag. And Macau is probably the future so far as big-time poker tournaments go, but there’s not nearly enough history there to include any of its big tourneys with the majors around the world just yet.