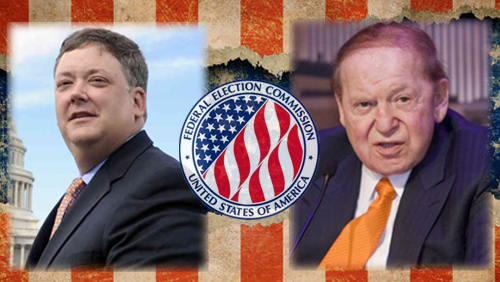 Last week’s 5-4 decision in McCutcheon vs. Federal Election Commission was the Supreme Court’s latest major reversal of campaign finance reform in the United States, following the 2010 Citizens United decision. Created in the 1970s when the stink of Watergate was still fresh in the noses of lawmakers eager to restore trust in the political system, the FEC previously imposed a number of limits on political donations. In addition to a $2,600 “base limit” on donations to individual candidates for federal office, there was also an aggregate limit for every two-year cycle of $48,600 for donations to individual candidates and $74,600 on donations to political parties and political action committees. Chief Justice John Roberts, writing for the majority, said that these aggregate limits did nothing to prevent quid pro quo corruption – the government’s interest in having the limits in the first place – and struck them down.

Anyone involved in the online gambling industry has to be wondering what this means for Sheldon Adelson’s crusade to ban online poker, which he has declared a “cancer” and promised to spend unlimited funds to outlaw. But it’s not just fans of the check-raise who are concerned. Others who fear the corrupting influence of money in politics in this new Gilded Age are aware of Adelson’s willingness to make it rain for anyone willing to toe his line. Bernie Sanders, the independent senator from Vermont, specifically mentioned Uncle Shelly when slamming the decision last week, saying, “The Supreme Court is paving the way toward an oligarchic form of society in which a handful of billionaires like the Koch Brothers and Sheldon Adelson will control our political process.”

Adelson certainly has been more willing than anybody else in the to open his checkbook for his would-be minions. ProPublica estimates a minimum $98 million expended during the 2012 election cycle. Of that total, $30 million went to a super PAC supporting Republican presidential nominee Mitt Romney, $20 million supported Newt Gingrich’s long-shot presidential primary bid via the Winning Our Future super PAC, $23 million went to the American Crossroads conservative super PAC, and $10 million more went to two different funds supporting Republican candidates. What’s not known and likely never will be is how much money Adelson funneled into dark-money groups that aren’t required to disclose their donors.

All of that money had an influence, to be sure, but it was also spent in compliance with existing federal law. In other words, the limits at issue in McCutcheon didn’t keep Sheldon Adelson from spending more money during the 2011-12 election cycle than you’ll ever seen in your lifetime. What McCutcheon will allow Adelson to do is to drop $2,600 into the account of as many candidates for federal office as he wishes. With 435 House races and 33 Senate races to be decided, that comes to a total of $1,131,000 if he decides to donate to every single Republican candidate. That’s no doubt a lot more than the 18 candidates for federal office per election cycle he could back before, but it’s not campaign-changing money for anyone at that level. And it’s a drop in the bucket compared to the sums the billionaire dropped in 2012, when he promised to spend “whatever it takes” to defeat Barack Obama’s bid for re-election.

What really ought to concern anyone worried about Adelson’s ability to influence elections and buy legislation to suit his social conservatism isn’t the majority opinion in McCutcheon vs. FEC. Those folks should look to Justice Clarence Thomas’ concurring opinion for a glimpse of true horror. Thomas agreed with the other four justices that the aggregate limits on political donations were unconstitutional, but he took the argument a step further. He signaled that the base limits on contributions to individual candidates, political parties, and PACs, which were not at issue in McCutcheon, would probably meet the same fate as the aggregate limits if a case challenging them were ever to make it before the Court.

As it stands now, Sheldon Adelson still has to funnel money through lots of different channels if he hopes to influence policy. If Justice Thomas ruled the world, Adelson would be free to hand-select candidates willing to stick to his script and bankroll their entire candidacies out in the open. Considering that result is only one court case away, and that the Roberts court has consistently opposed campaign finance restrictions, the online gambling lobby should probably plan to fight fire with fire. It’s time to start looking for a sugar daddy and some candidates of its own, pronto. If anyone calls it corrupt, just tell them it’s democracy, Sheldon Adelson-style.