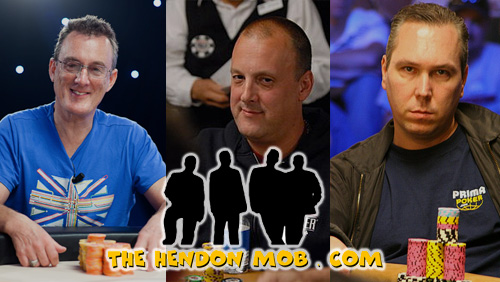 The Hendon Mob become the Poker Mob as the brothers Boatman and Joe Beevers sign an exclusive deal with Grosvenor Casinos that will see the trio play their poker both live and online at Grosvenor poker rooms through the country.

I bet you thought you had heard the last of them?

Well fortunately you were very much mistaken.

The brothers Boatman and Joe Beevers have come full circle after securing a deal with Grosvenor Casinos that will see the trio operate under the name of the Poker Mob in both live and online Grosvenor card rooms up and down the country.

It’s the third sponsorship change in recent years for the trio after first parting ways with Full Tilt Poker (FTP) in 2011, and then the Genting Group in 2013. The Hendon Mob – as they were formally known – were the first European players to be sponsored by FTP and went on to become a huge affiliate for the site by use of their tremendously popular Hendon Mob website.

That website, and brand name, was sold to the Global Poker Index (GPI) in 2013, and with Ross off searching for more acting gigs, Joe concentrating on his Betting Emporium, Barny picking up lifetime achievement awards all over the world, and Ram continuing to do a Lord Lucan impression that Roland de Wolfe would be proud of, one would think that would have been it.

The three of them started out their careers playing cash games and tournaments in their local Grosvenor Casinos, and it’s a nice touch to them back on the circuit.

“It means we’ll be back playing at grass roots where we began,” Said Joe, “The Grosvenor Victoria Casino is regarded as the heart of UK poker; Grosvenor is a long established name with more card rooms in the UK than anyone and we are really looking forward to working with them and visiting lots of their poker rooms new and old.”

Barny Boatman was equally enthused about the idea: “I can’t wait to jump in my car and travel to places like Edinburgh, Manchester and Cardiff. If I’m not at the tables there’ll always be someone to have a beer with, so it’s win win!”

The trio has also created a new website called rather aptly: The Pokermob.com and it contains a forum, poker mob league and many other features.