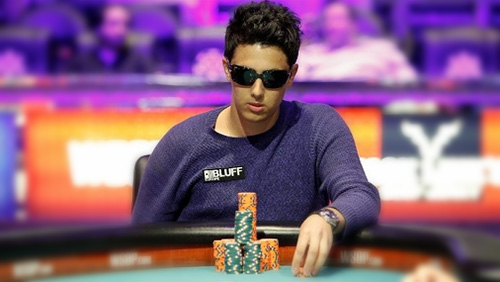 Craig McCorkell is one of the many British poker gems that are currently sparkling on the world scene.

He is a World Series of Poker bracelet winner, online tournament behemoth and coach at the online poker-training site Run it Once where he gets to take orders from none other than Phil Galfond.

He is also a man of integrity, and honesty, and that’s why I have invited him on the show to talk about the controversial act of ‘ghosting’.

Can you begin by explaining to the listeners what the term ‘ghosting’ means?

“Ghosting would be when someone is playing an online tournament and someone else is helping either in person, via Skype or another medium instructing them what to do.”

You went public on Twitter a while back now to complain about the fact that this was blatantly happening in our game – what provoked this reaction?

“I was playing an online tournament and we got to the final table when I noticed that one of the regular players, who I play with a lot, had either changed their strategy drastically or someone was helping them more than they should be.

“I don’t care who I play against, but when I am playing against someone I think is someone else then I have a problem with it. I have my notes, stats and I am making decisions on these notes, especially on the final table.

“Players who have been in a backing arrangement will have been in a situation where they are watching a horse and they are not doing things you would maybe do and you instinctively want to take over, but you have a role as a backer and friend to be honest and let the person play their own game.”

So this problem is prevalent with regs in the game and not just amateurs?

“A lot of people playing mid-high stakes online tournaments are backed now, and a lot of people doing the backing are successful and very good players in their own right. Perhaps, they are not fulfilling their role as honestly as they should be. They have a financial interest as to how their horse does on a final table, so it does present an interesting dilemma.”

“The reason I tweeted was not just to have a moan, but to raise the issue of how we police this? People who play online poker can get lonely so Skype is a way of passing the time, and chatting with friends, so you can’t enforce anything that would stop that from happening. So I tweeted to try and get some sort of ingenious feedback that the online poker sites could use to police this.”

How big of an issue is this?

“It’s such a huge issue and there doesn’t seem to be any obvious way of policing it. Had someone come to me with a good idea I would have definitely e-mailed a number of sites and provided them with the information.

“I think the sites would be willing to listen if we had something to offer them. Most of the suggestions were things that were invasive to people’s computers and online sites are not going to go down that route. The things that were being suggested were realistic if the pool of players was smaller, but not with a site like PokerStars for example.

“People don’t realize how big of a deal it is. I have heard people who are well known, and respected, in the poker community talking about this in public as if it’s not a big deal that they take over their horses play in the final stages of their tournaments. I don’t think this is acceptable and as a community we should frown upon this behavior.”

You have been backed before, have you ever been put under this kind of pressure?

“I have never been put under that pressure, but I can imagine it’s very difficult situation to deal with. It’s the backer’s money and generally they are a better player. So you will feel so much pressure because if you win it’s more money for you as well, so it’s a big ethical dilemma for the people being backed.”

Is this a rule violation or just an ethical matter?

“It’s definitely a rule violation. It’s the same online as live. It’s one player to a hand at all times. You are responsible for your account – no other person. I think if you disconnect you can e-mail support to ask for someone to temporarily take over but apart from that you are on you own.”

As a coach do you get clients asking you to ghost them?

“Most of the amateur players I know have big enough egos. They think they are good enough to do it on their own, and find it fun too, so I will talk to them about hands, but I will never tell them what to do. That’s the line that shouldn’t be crossed.

“The line is blurry though. There is a difference between someone taking over your tournament and someone saying, ‘this is a really tough situation what do you think?’

“Although I agree there are some moral issues with that also. If it was live poker you couldn’t sit together and make a committee based decision over a hand.

“As a community we have to say this is not acceptable and if you are doing this you need to stop. Peer pressure is the only way to change this until the online sites can think of a better way of policing it.”